Look what I did the day after Christmas.
Rahma had a friend come in who applied henna to my hands and feet in traditional designs.  The girls also had their hands done.
Here's what the first stage looks like while the henna is drying--it's still very dark: 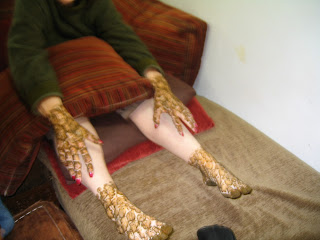 And here's the end result after setting the design with olive oil, washing off the henna, then spraying it with perfume to bring out the orange. 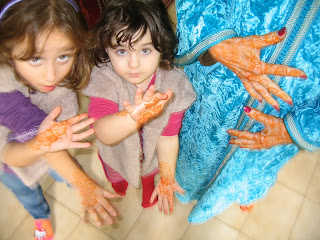 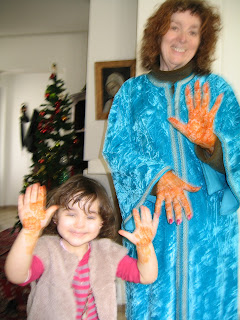 As you can see, the color is deeper on my palm. 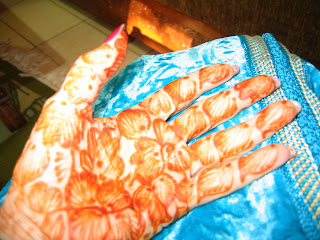 Getting decorated with henna was a fascinating process that took several hours.
The now very beeaauuuutiful Judi
Posted by Judi at 2:58 AM 6 comments:

It's the night before Christmas and all through Rabat . . .
The girls have done the Advent Calendar 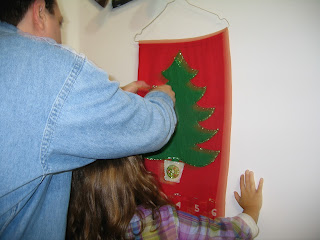 They've visited Santa at the American Club and assured him they were very good girls: 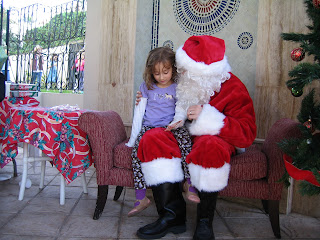 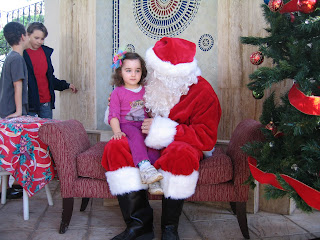 The tree is decorated: 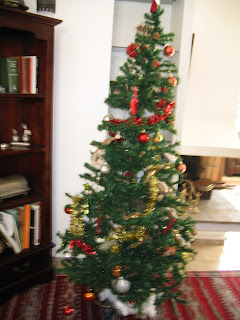 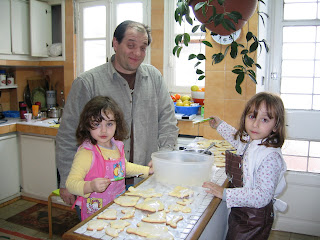 But here's what it looks like in the garden:
Flowers are blooming: 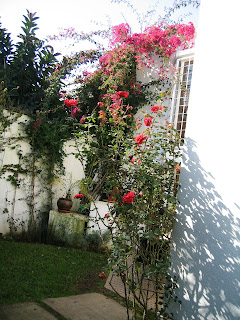 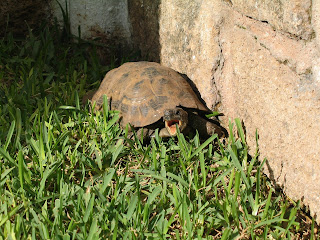 Mrs. Tortoise sunning herself in a warm corner.
The weather has been mostly sunny and in the 60s and 70s on those days.
I must confess it's a little odd for a girl who's spent most of her life in the northern half of the United States to be snowless this time of year.  Although I can't say I miss the shoveling.
Joyeux Noël du Moroc
Posted by Judi at 6:32 AM 3 comments:

Getting Around in Rabat


Okay, so I'm taking a French class at AmidEast. 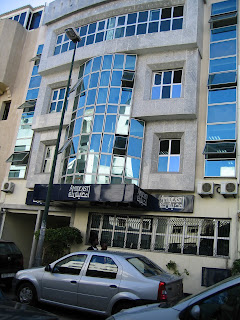 and getting there on my own these days.  I catch a taxi on the corner of the main street 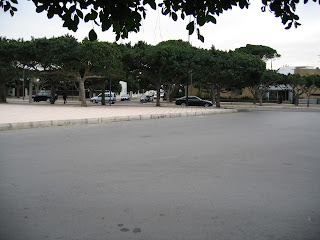 and tell them to go to McDonald's (yes, there are several McDonald's in Rabat) Magdal (the neighborhood where AmidEast is) because, really, taxis don't go to specific addresses.  You have to tell them a landmark.  When the weather's nice (which has been every day except the second day of class), I walk home. Takes less than half an hour.  Below are some street scenes on the walk.
Crazy parking.  No parking meters, but there is a parking guy (in this picture, he's the guy in blue on the sidewalk on the left ) on most street corners and in parking lots who tells you where to park and helps you maneouvre into the space.  When you leave, you give him 2 dinar (approximatel 25 cents) for his assistance. 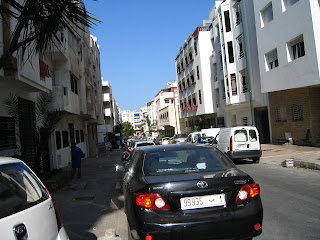 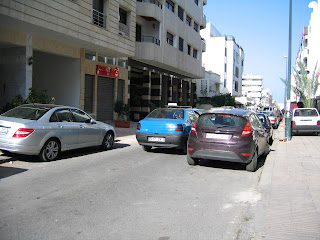 Crazy traffic.  The blue car in the middle of the street is the kind of taxi I take.
And you'll notice that sidewalks aren't just for walking anymore.
And here's the street where I'm staying. 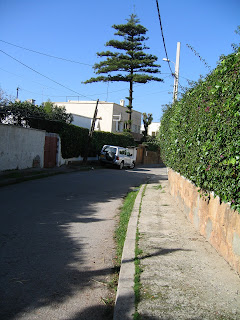 The house is behind the white gate on the left.
It's a nice walk.  Gives me time to practice French in my head and mull over any plot points I want to work on.
à plus tard
Judi
Posted by Judi at 9:27 AM 4 comments:

A Visit to Chellah 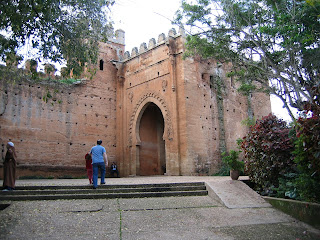 The other day we visited Chellah, the site of ancient Roman settlement in Rabat (long before it was Rabat).
Now a crumbled ruin, this outpost of the Roman Empire was probably established around by the Phoenicians in the 12th Century BC. 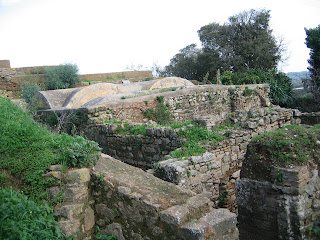 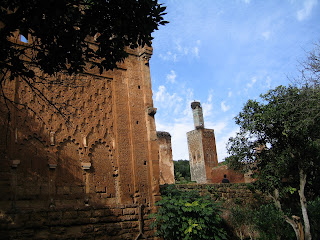 
and cats near a wishing pool 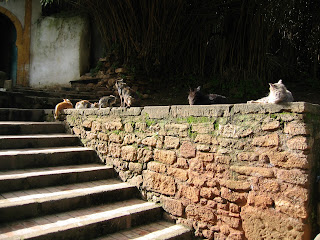 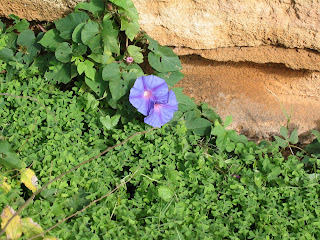 Parts of it are now overgrown with lush vegetation. 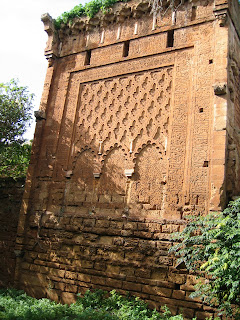 Sometime in the 1300s, the sultan Abou Said constructed a small fortress beside the site of the Roman ruins. 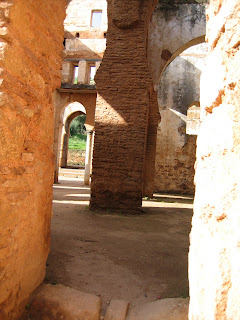 
A successor rival walled the whole area off preventing access for a long time. 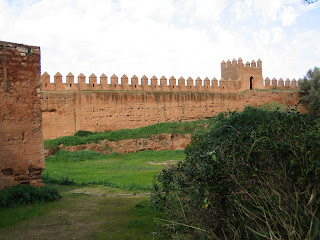 Now accessible to the public, it is a peaceful area to wander through and view the ancient remains of old civilizations. 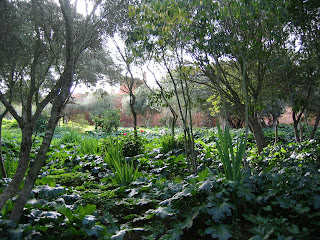 And, of course, imagine stories of the lives of the people who lived during those times.
More later, Insha'Allah
Posted by Judi at 7:46 AM 1 comment:

Random thoughts from the trip to Morocco.

I got to Logan in plenty of time, especially since the departure was delayed a couple of hours. There was plenty of time to enjoy a latte and scone for breakfast at Starbucks. Wandering around the gate area after eating, a guy started chatting with me. He was from Lebanon and invited me to join him for something to eat. Interesting pick-up line for an airport. Guess it's the same wherever.

Normally, I can sleep on international flights. However, my muse was busy working. About half way to Paris, I woke up, wide awake, and wrote for the rest of the flight. I was pleased my muse had followed me, but she could have chosen a more convenient time to put me to work.

Arriving at the Charles de Gaulle airport at my breakfast time (their noon) I needed something to eat. So . . . just because they call it French fast food doesn't make it haute cuisine. I've seen better grub at Mickey Ds or 7-11. The international gate reminded me of pictures I've seen of Gare du Nord. The rounded roof and long rectangular building. The difference being planes instead of trains. Constructed with glass and metal, the sounds reverberated enough so that it was difficult to understand the announcements, particularly those in French.

And I nearly froze while waiting for my next flight. Good thing I brought my winter jacket and could put it on over my leather jacket with my jeans. And had a turtleneck on under by fleece shirt. It took half of the trip to Rabat before I was warm again.

But hugging my two beautiful granddaughters made it all worth while. 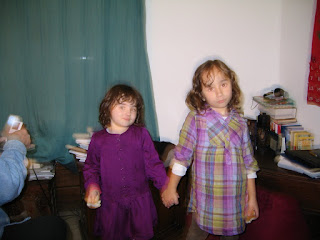 Au revoir til next time.

Happy Thanksgiving to everyone.

I'm running back and forth between the kitchen and my computer with frazzled hair and my slippers still on, but wanted to say hi.

Since I'll be leaving to visit my son and his family in Morocco for the month of December, I decided I would actually have something to write about and have entered the blogging world.

Have a happy day. More later (and that includes leftovers).
Posted by Judi at 6:35 AM 1 comment: