Visit to a House of Refuge

After breakfast and a walk on the beach

we visited Gilbert's Bar House of Refuge, built on the "St. Lucie Rocks" (Hutchinson Island).  It is the only one remaining.  You can find more information by visiting www.elliottmuseum.org 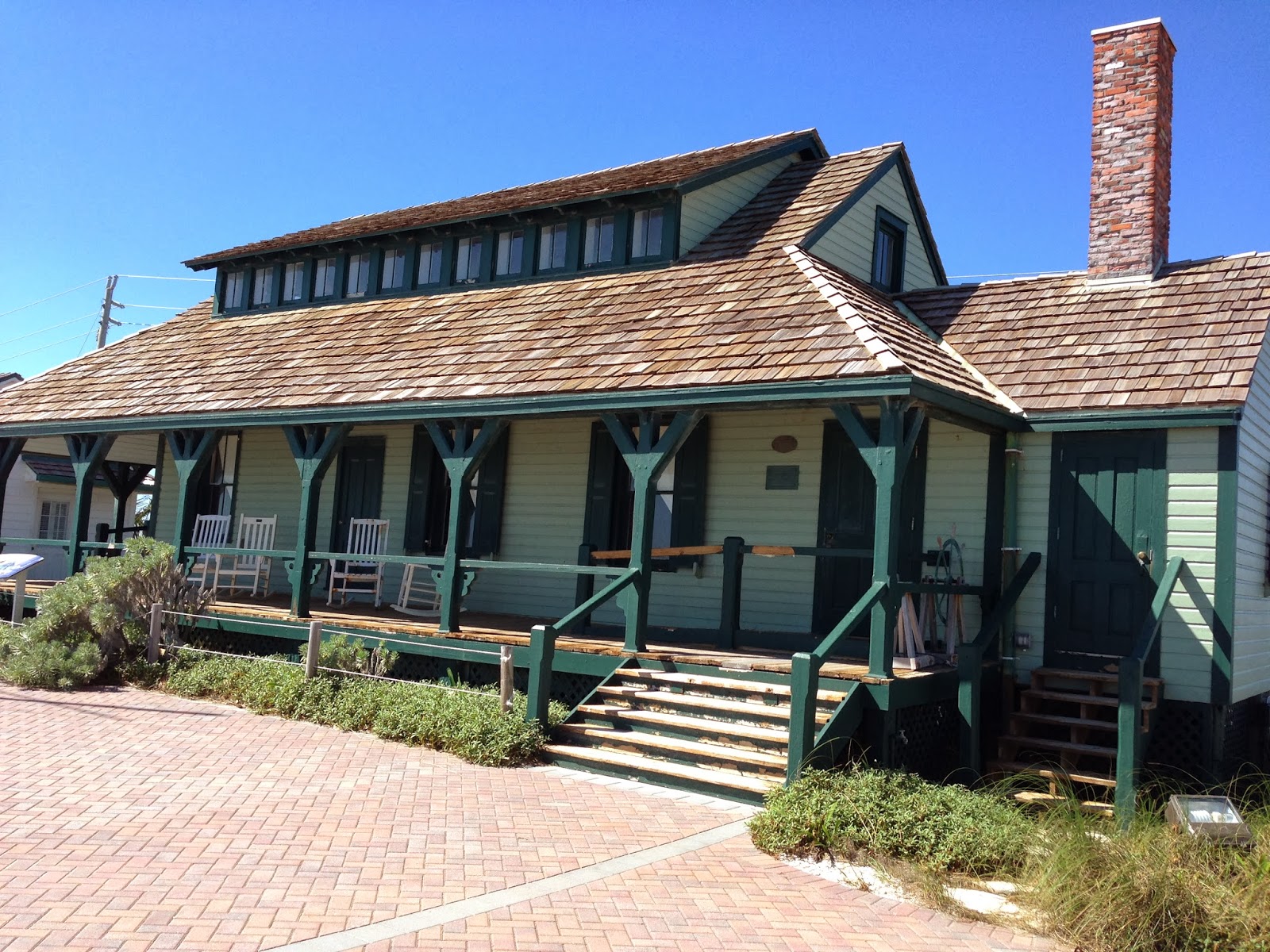 Houses of refuge were built along Florida's east cost, a sparsely populated area when this one was constructed in 1876.  A keeper and his family lived in residence, and after storms, he walked the beach, looking for shipwreck survivors to rescue.

This would make a cozy place to live.  I can totally imagine myself here.  Come with me on a tour.

A cozy room for a quick breakfast. 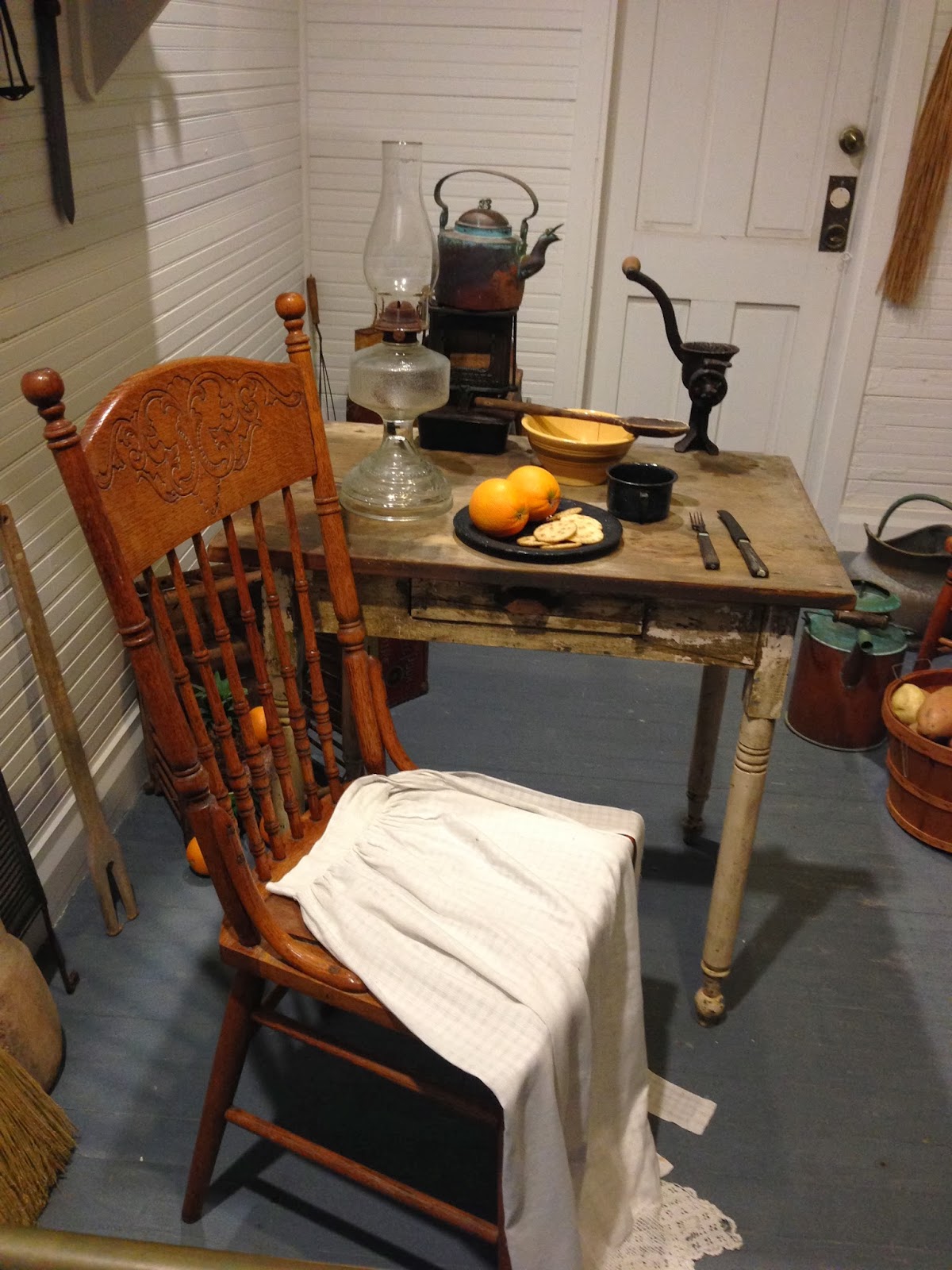 A formal dining room to entertain guests when they drop by. 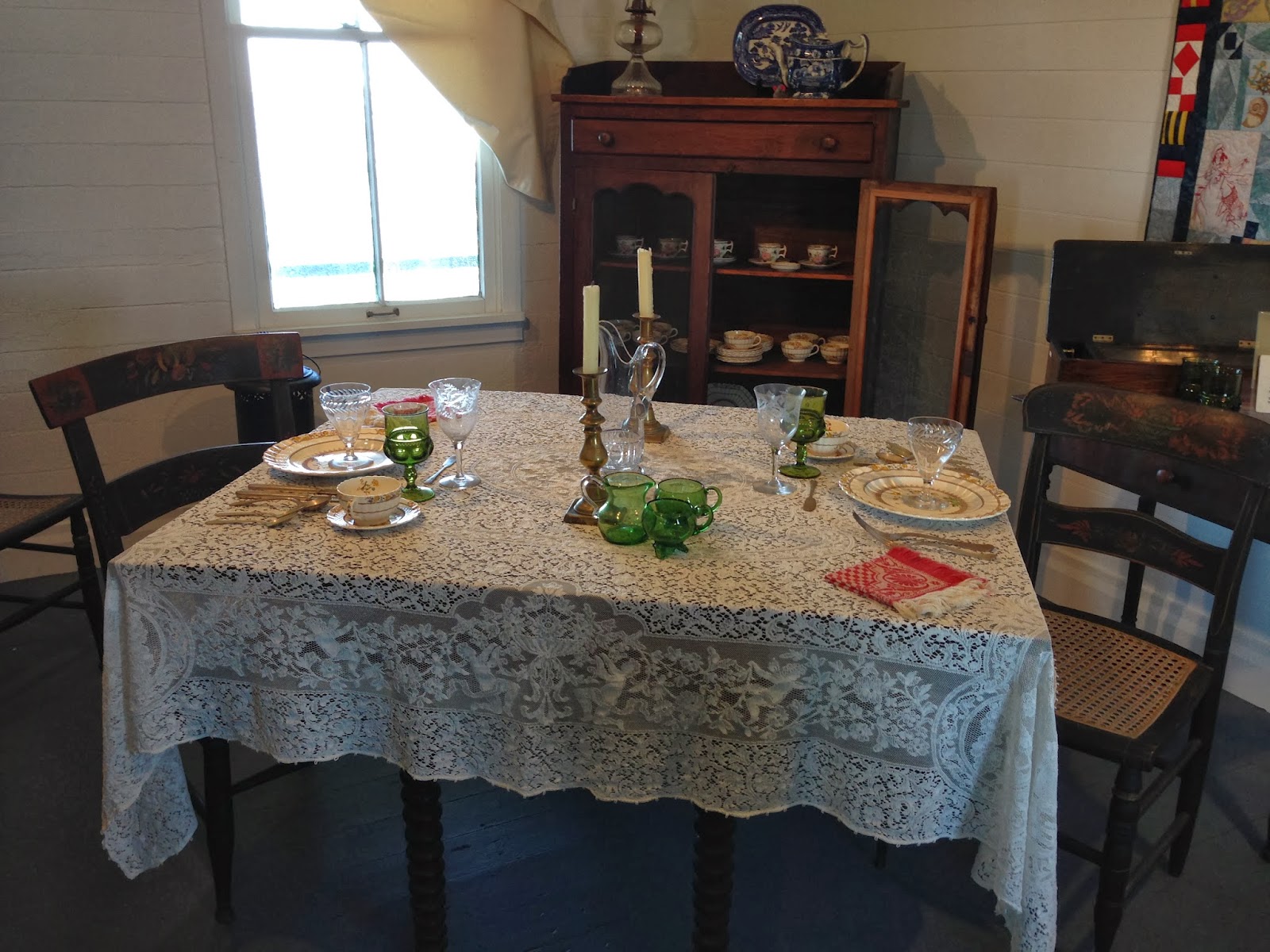 A nice old desk to write at and a gramophone to play my favorite tunes. 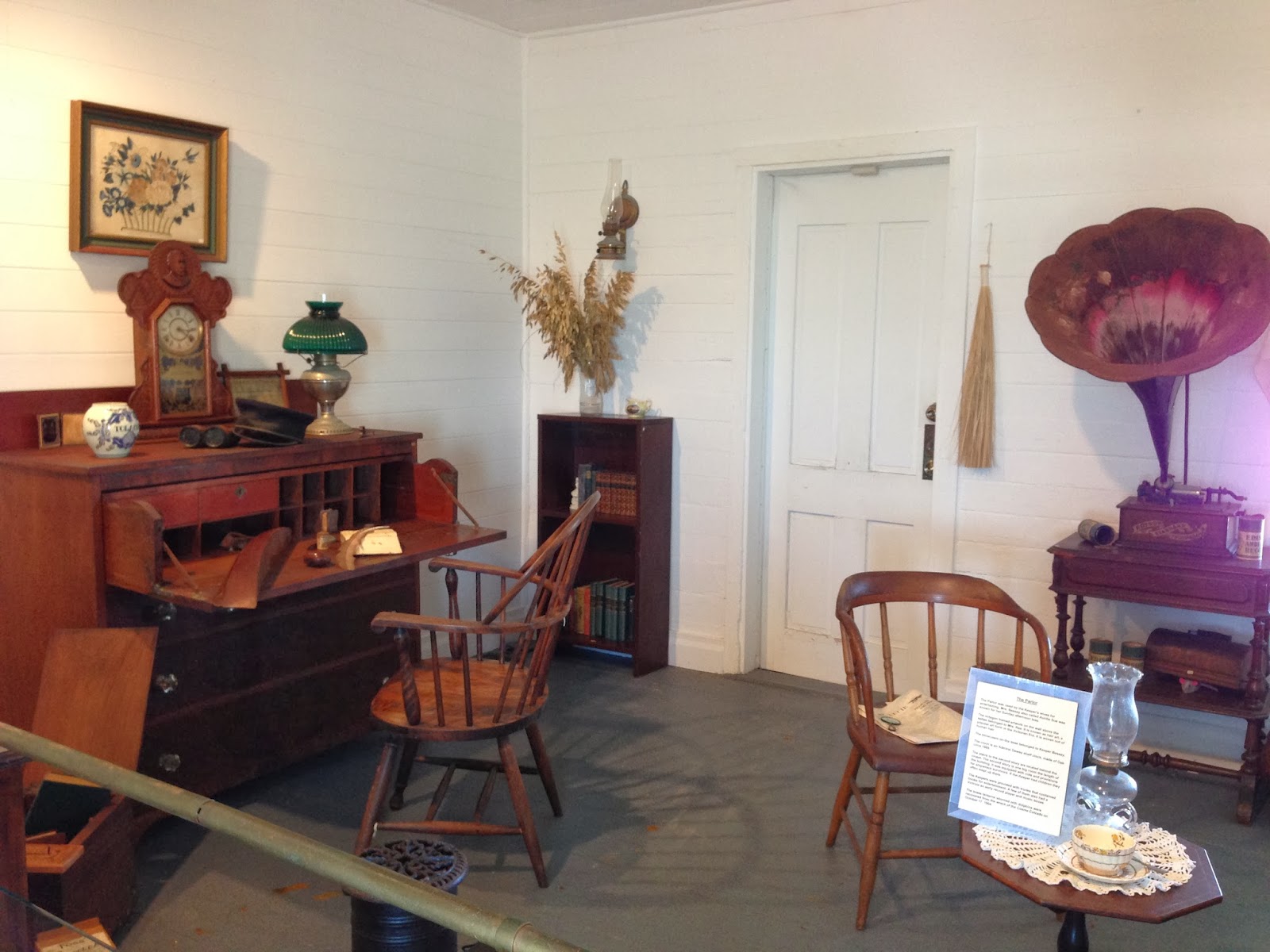 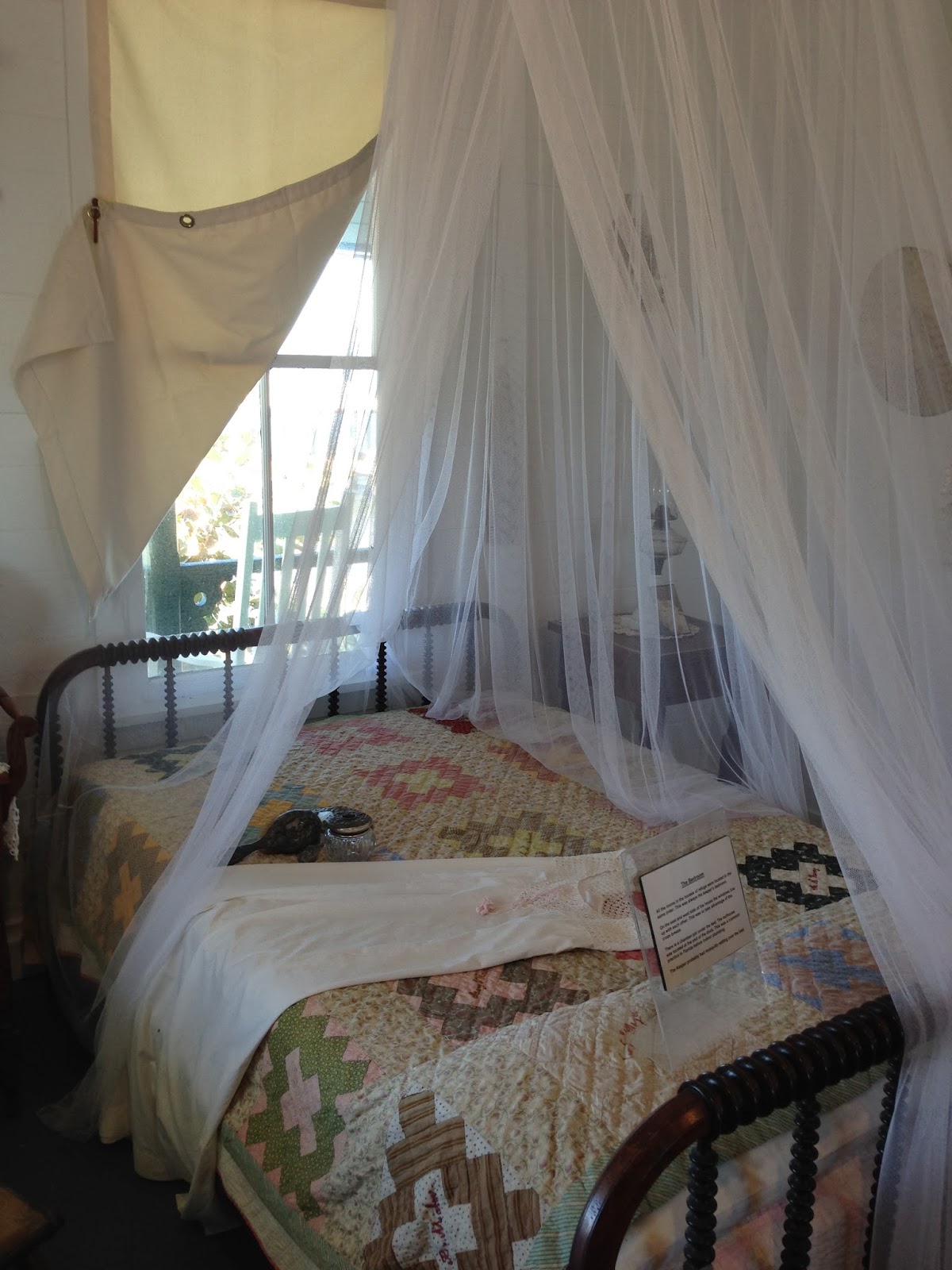 A great veranda for a morning coffee break 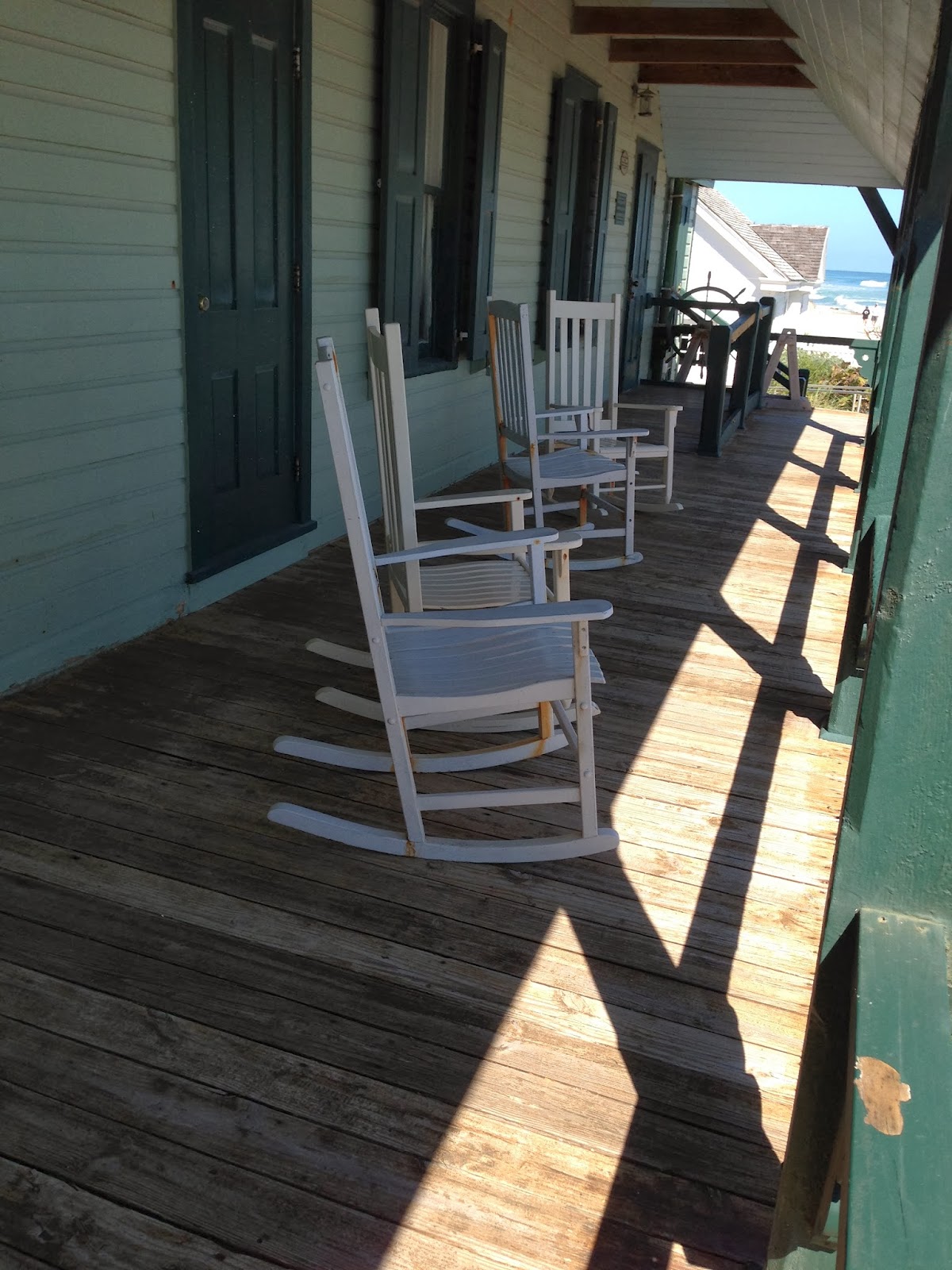 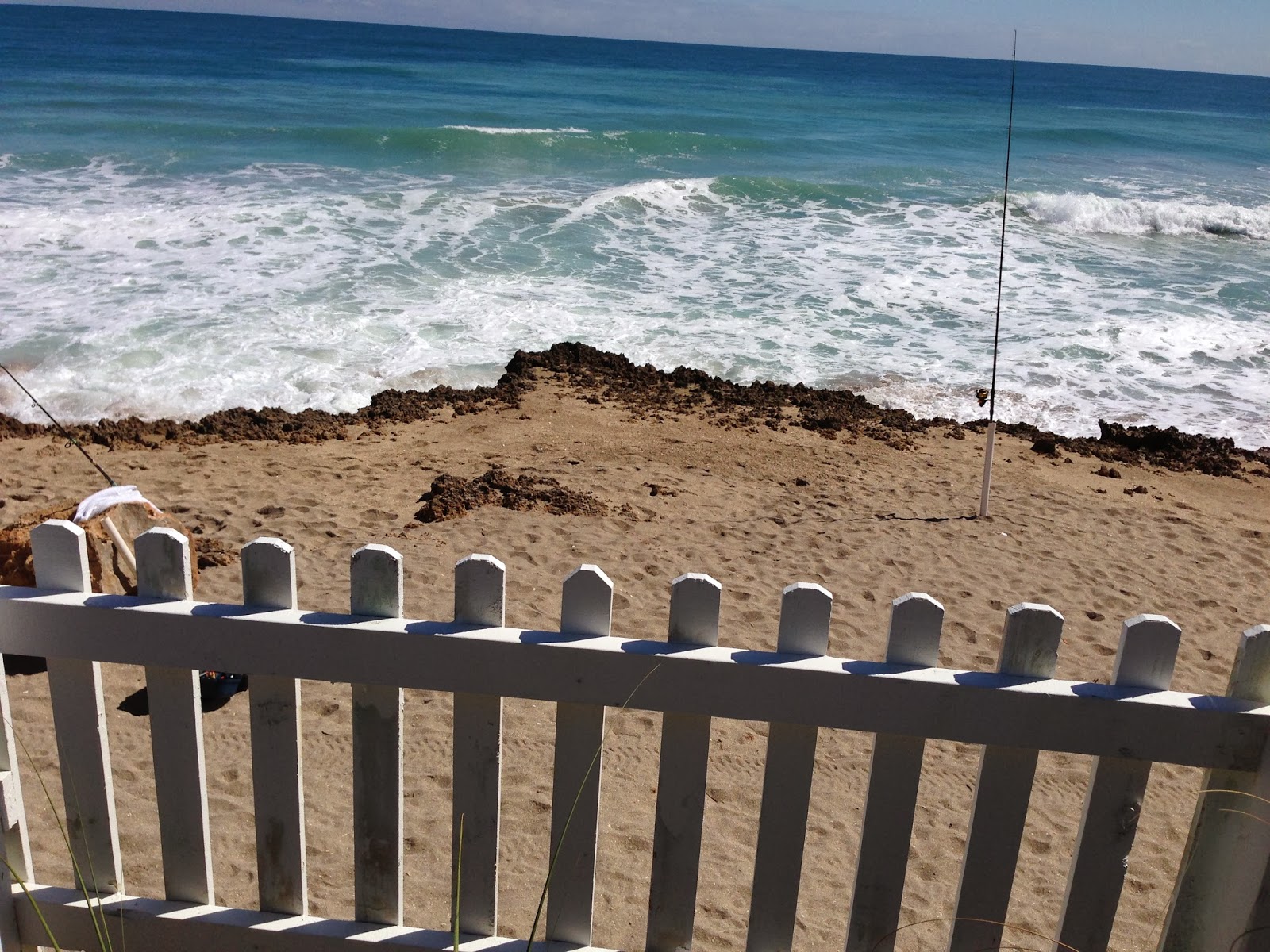 with an awesome view.


Sign me up.  Oh, wait.  There wasn't any internet back then.  Guess I'll stay in this time in the wilds of Maine.

Fun in the Sun

It's March.  It's sunny.  It's possible to walk on the beach wearing shorts.  So, I guess I'm not in Maine. 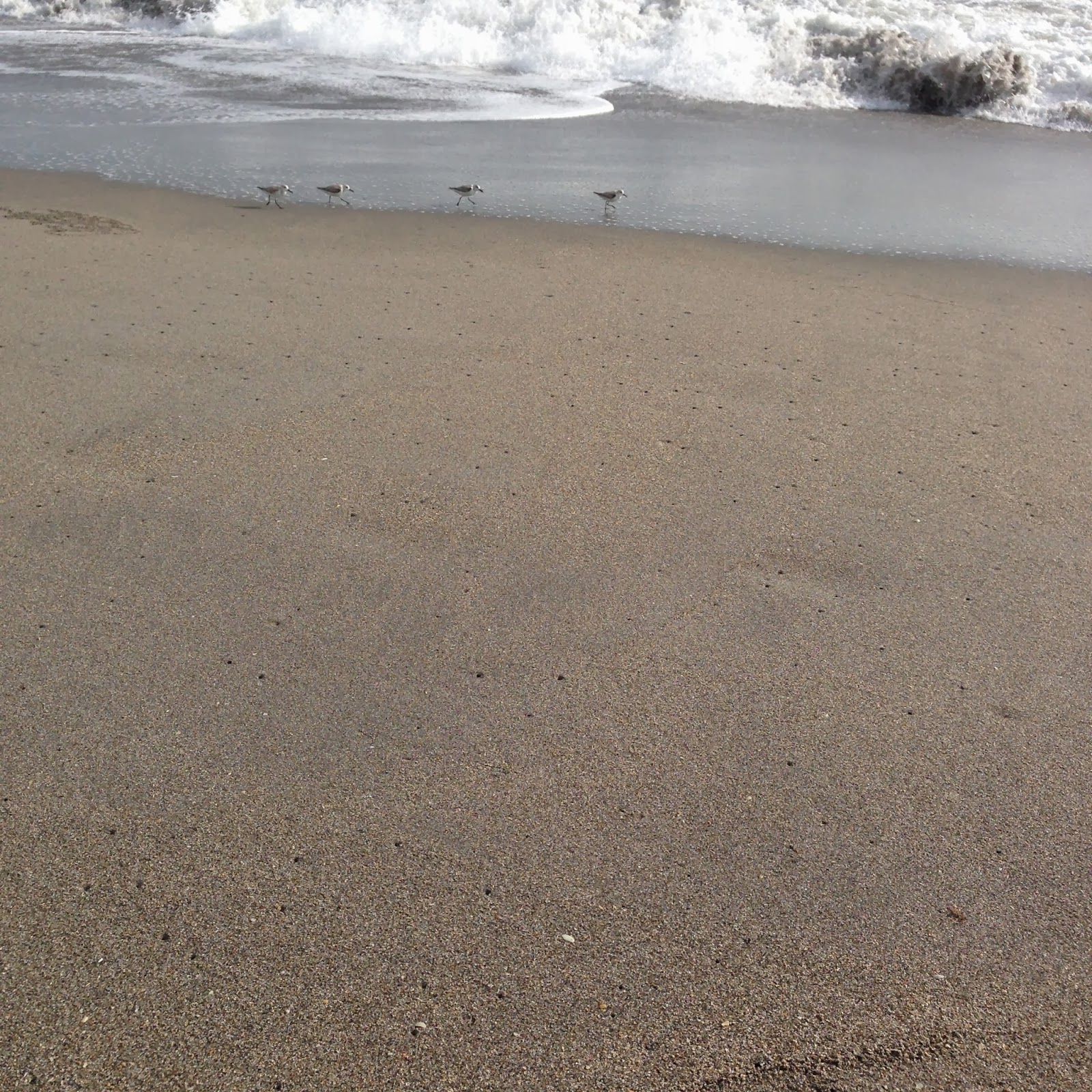 Then back for lunch, yummy cheeseburger soup, at The Grill in the clubhouse. 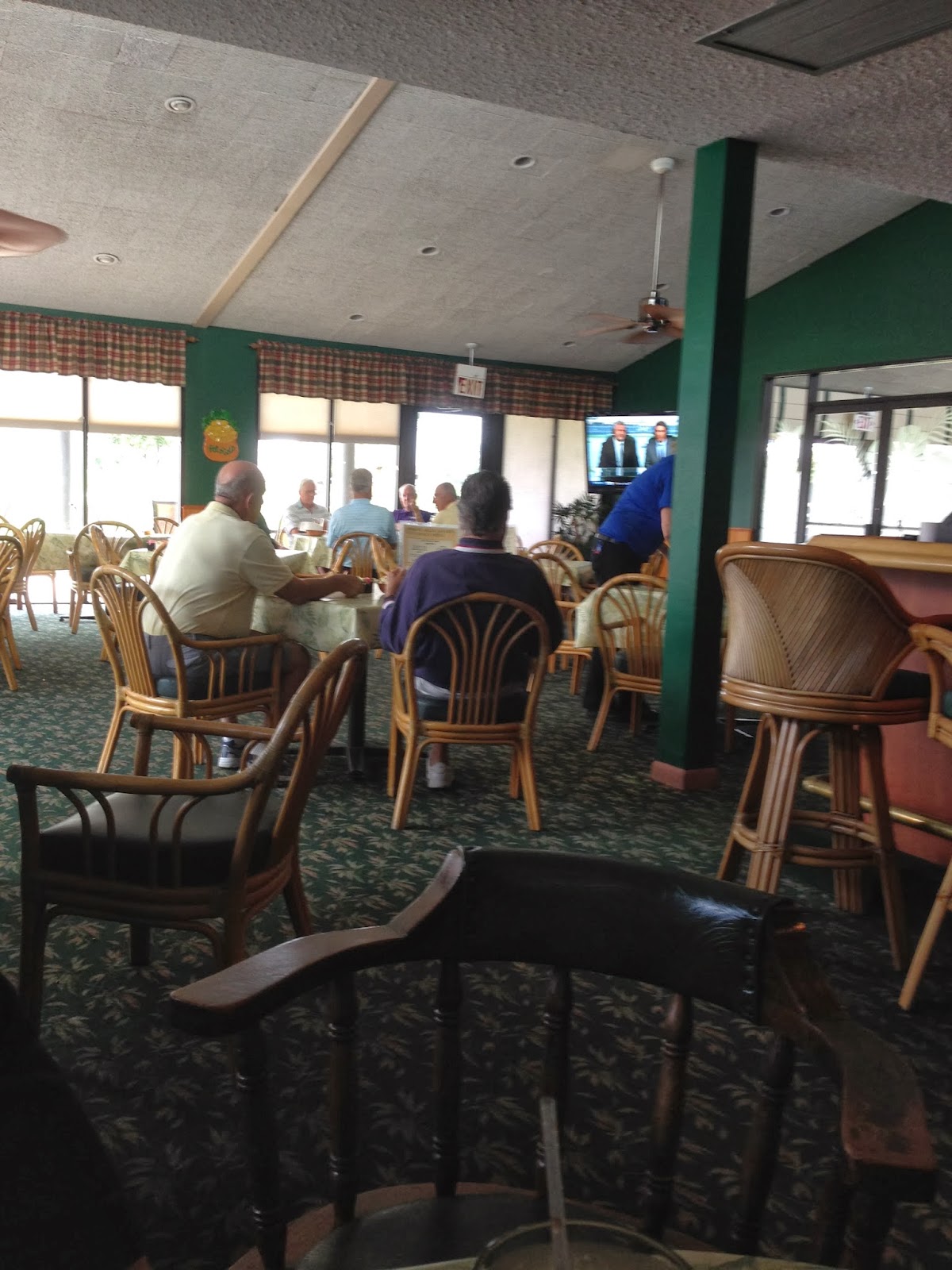 Thanks to Tony and his Christmas gift of a shirt from Asheville Sun Soo Tai Kwon Do (http://gr.pn/1g95cue), I was able to get into the Grill Room ('golf' shirts required).

Later that afternoon, after a short drive and we reached the Florida Oceanographic Coastal Center.  This an awesome place.  Located on Hutchinson Island, which is a barrior island, they have great activities and educational programs.  I chose not to join the fun of sting ray feeding.  With my luck, they would decide I was attack worthy.

There was a great presentation about the three kinds of sea turtles, loggerhead, green and leatherback.  The females dig nests in the sand, lay eggs and cover them.  When the babies hatch, they have to dig up through something like three feet of sand, then head for water. 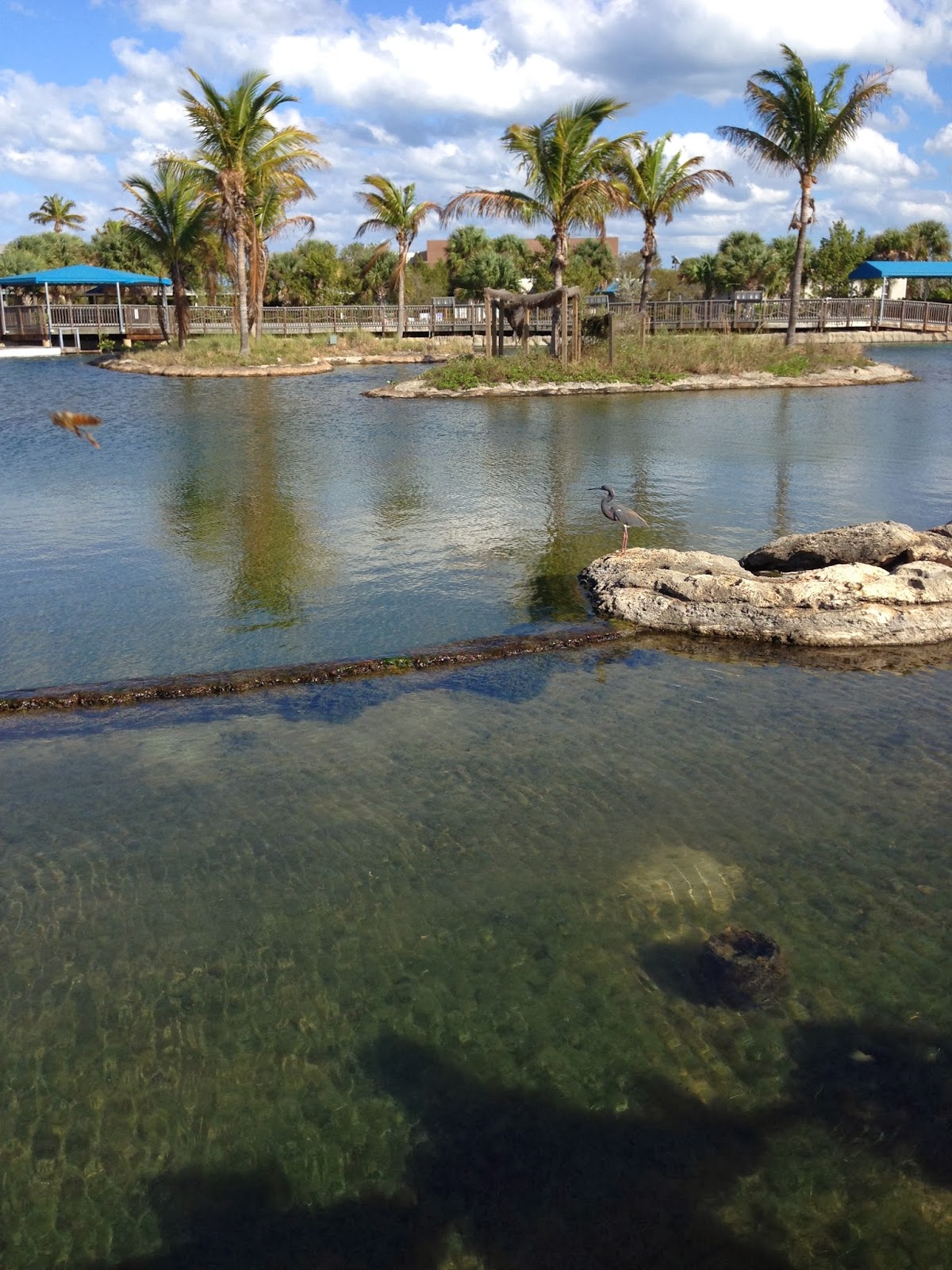 complete with sharks, jacks, snook and others.  And turtles. 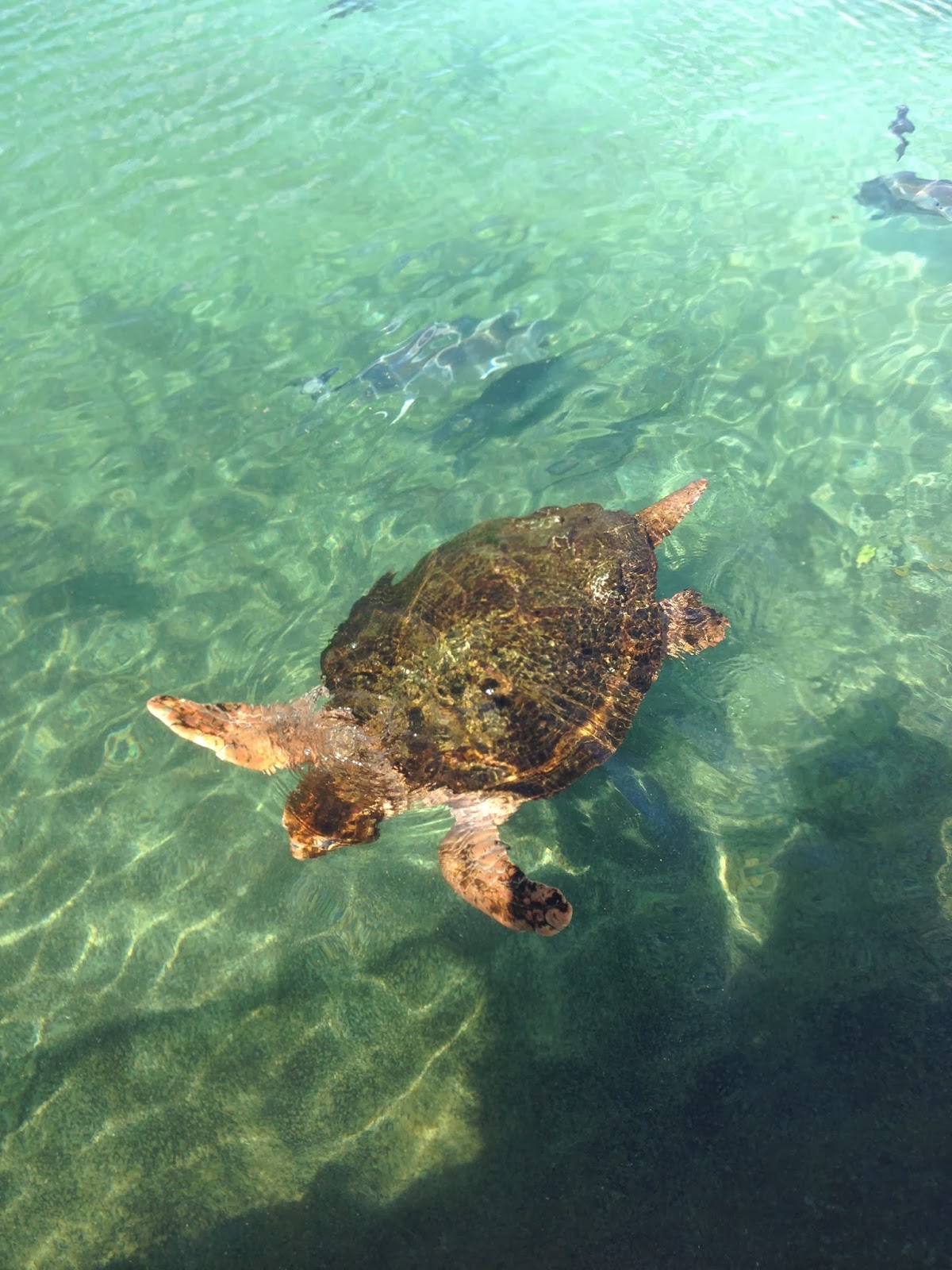 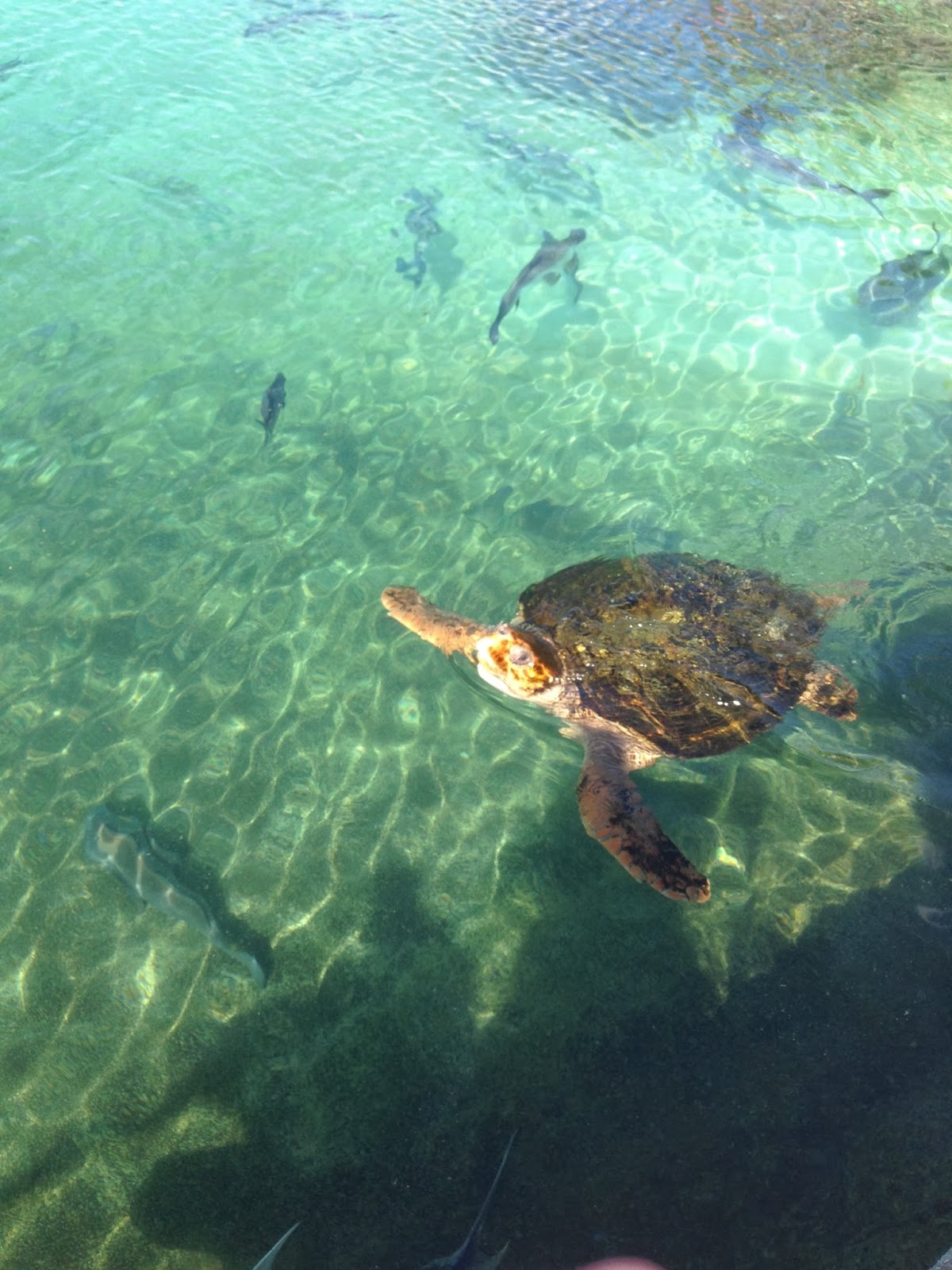 (These were taken during the fish feeding)

We hiked through a mangrove swamp 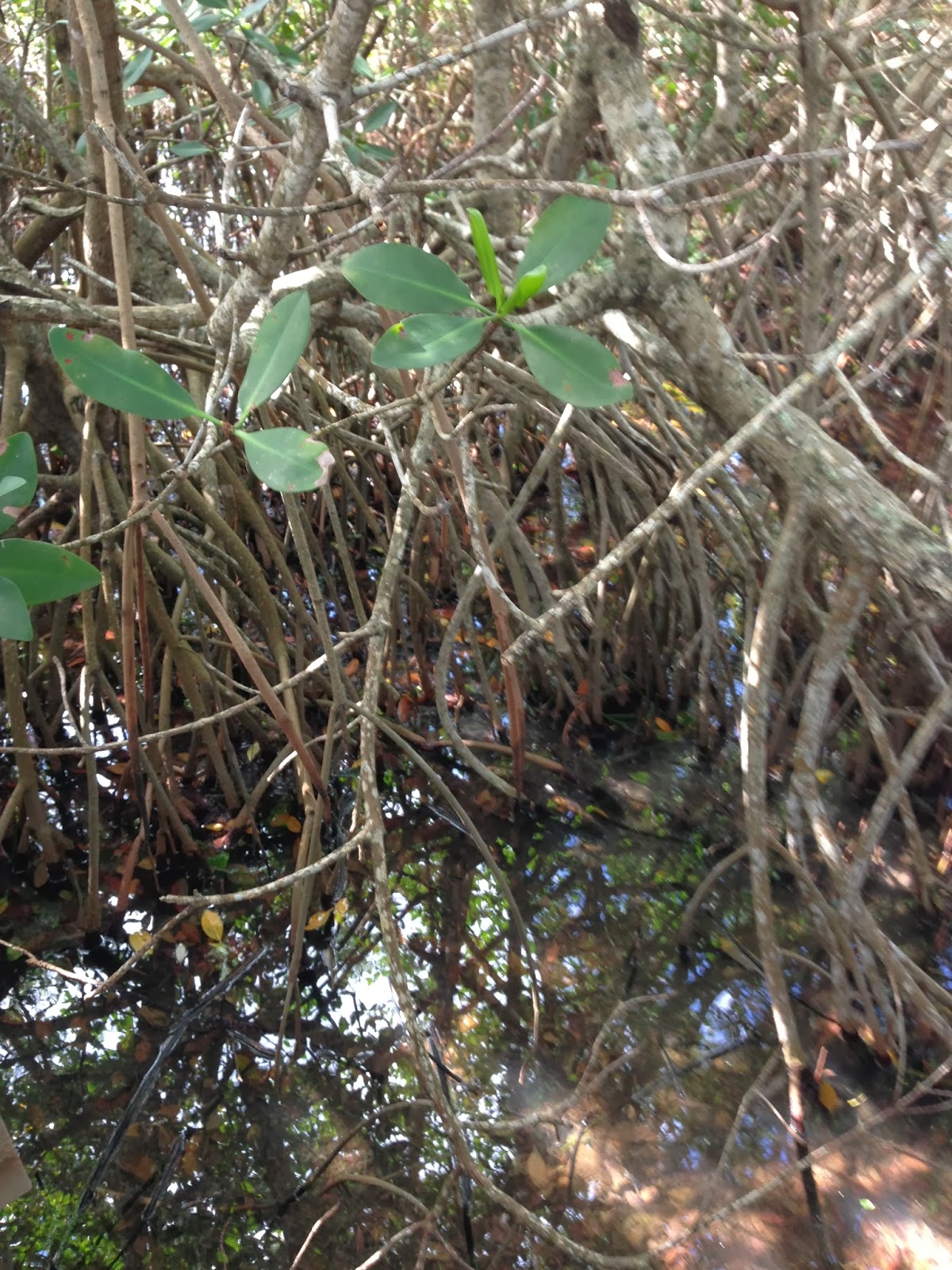 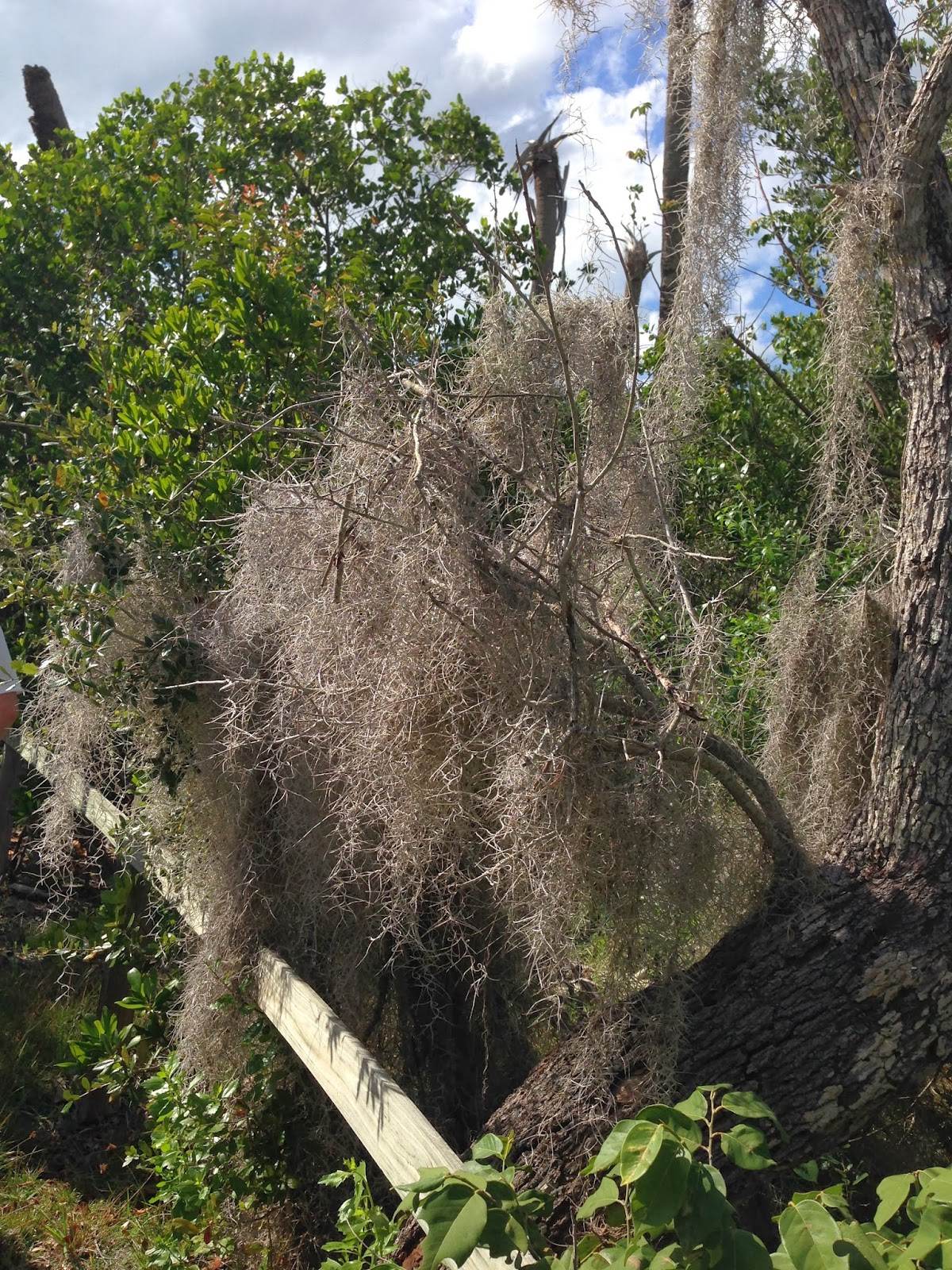 And saw a replica of their dwellings. 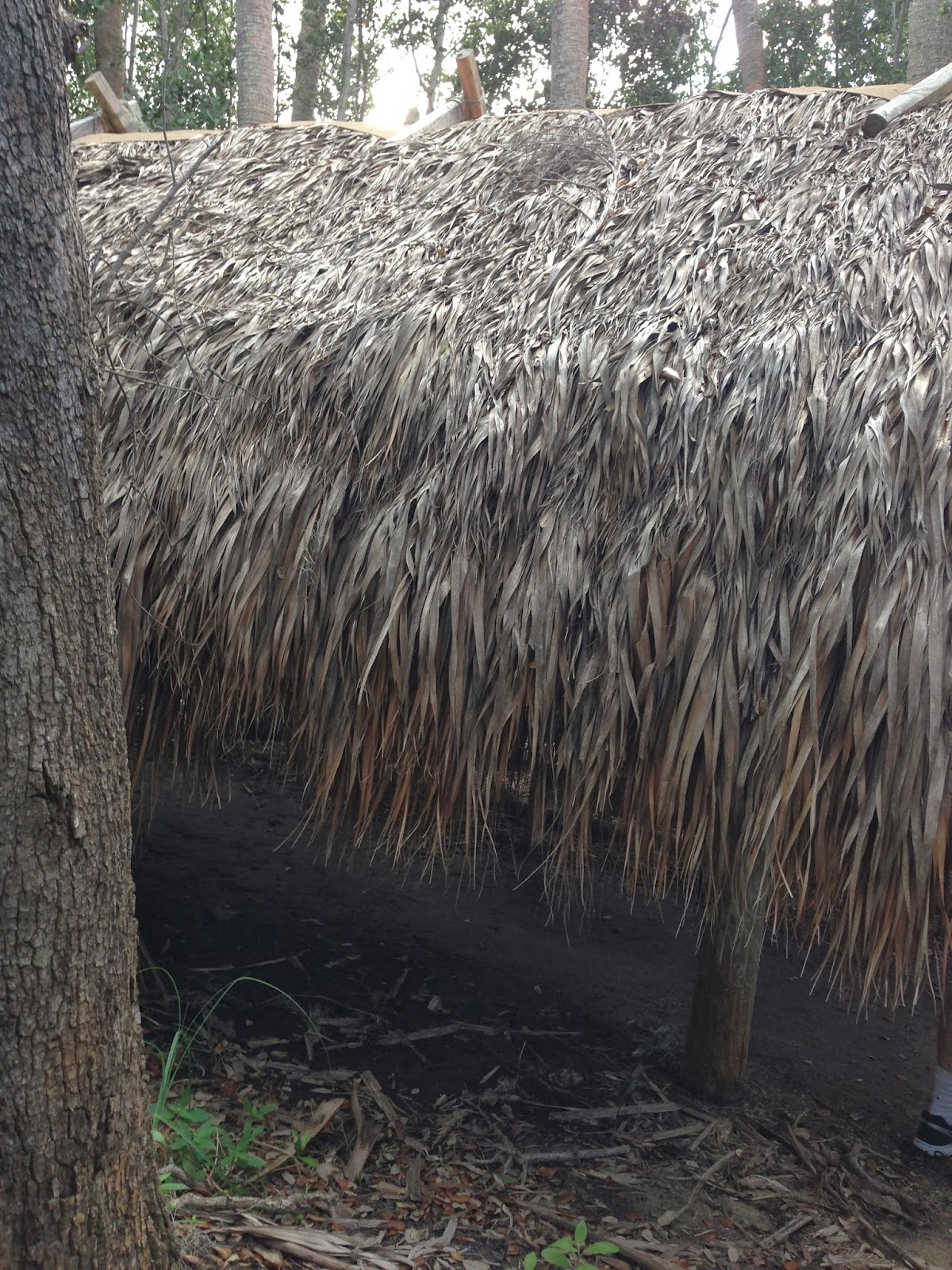 The turn-around point is the Indian River Lagoon (named for the Ays Indian Tribe who were the original inhabitants of the area, known as the Ays Coast or the Province of Ays).  As you can see from the waves, it was a windy day. 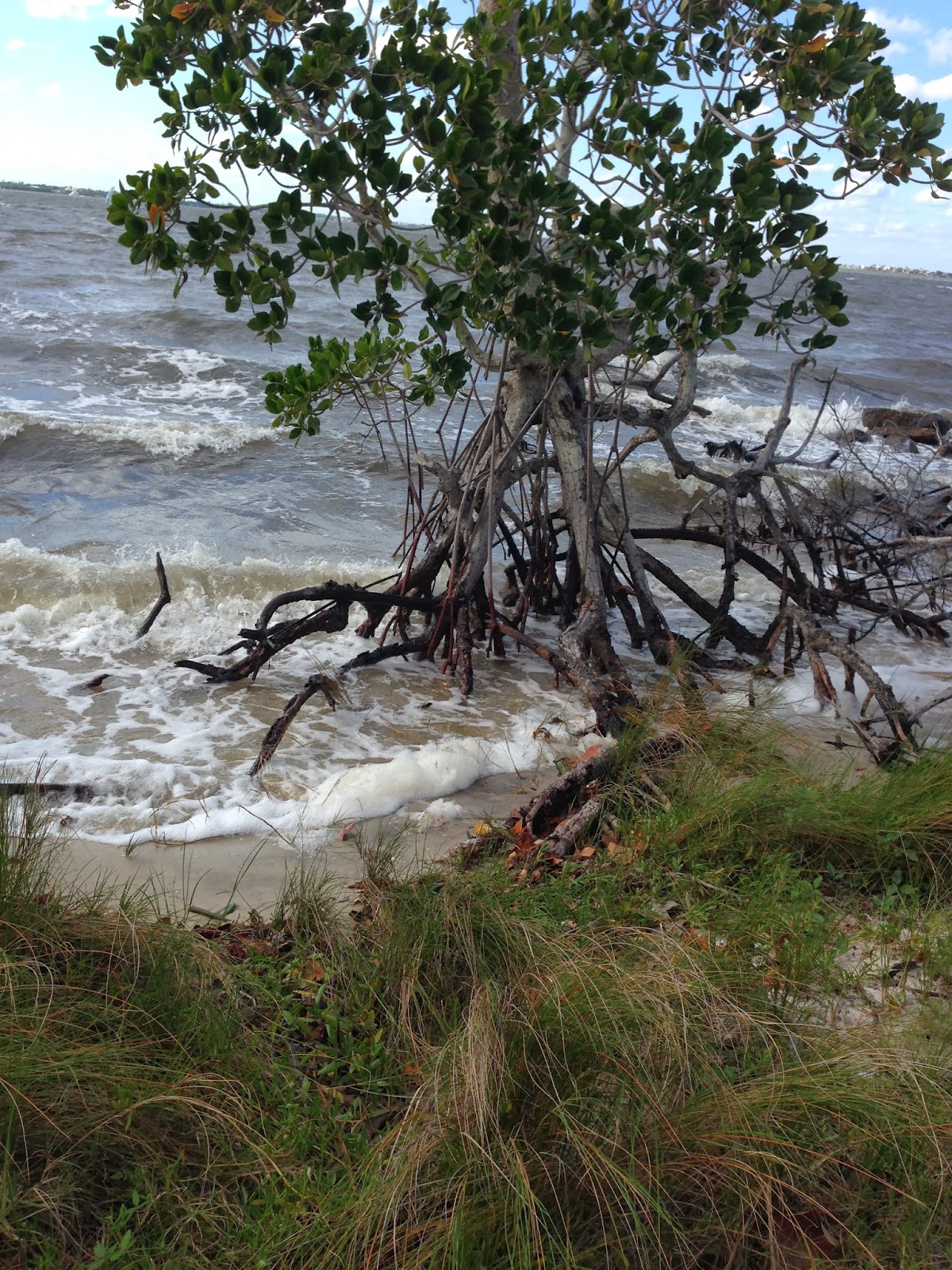 On the return walk, we spotted a gecko in a tree beside the trail.  If you look closely, you can see him perched on the branch (he's the tiny light green slash just above the middle of the picture. 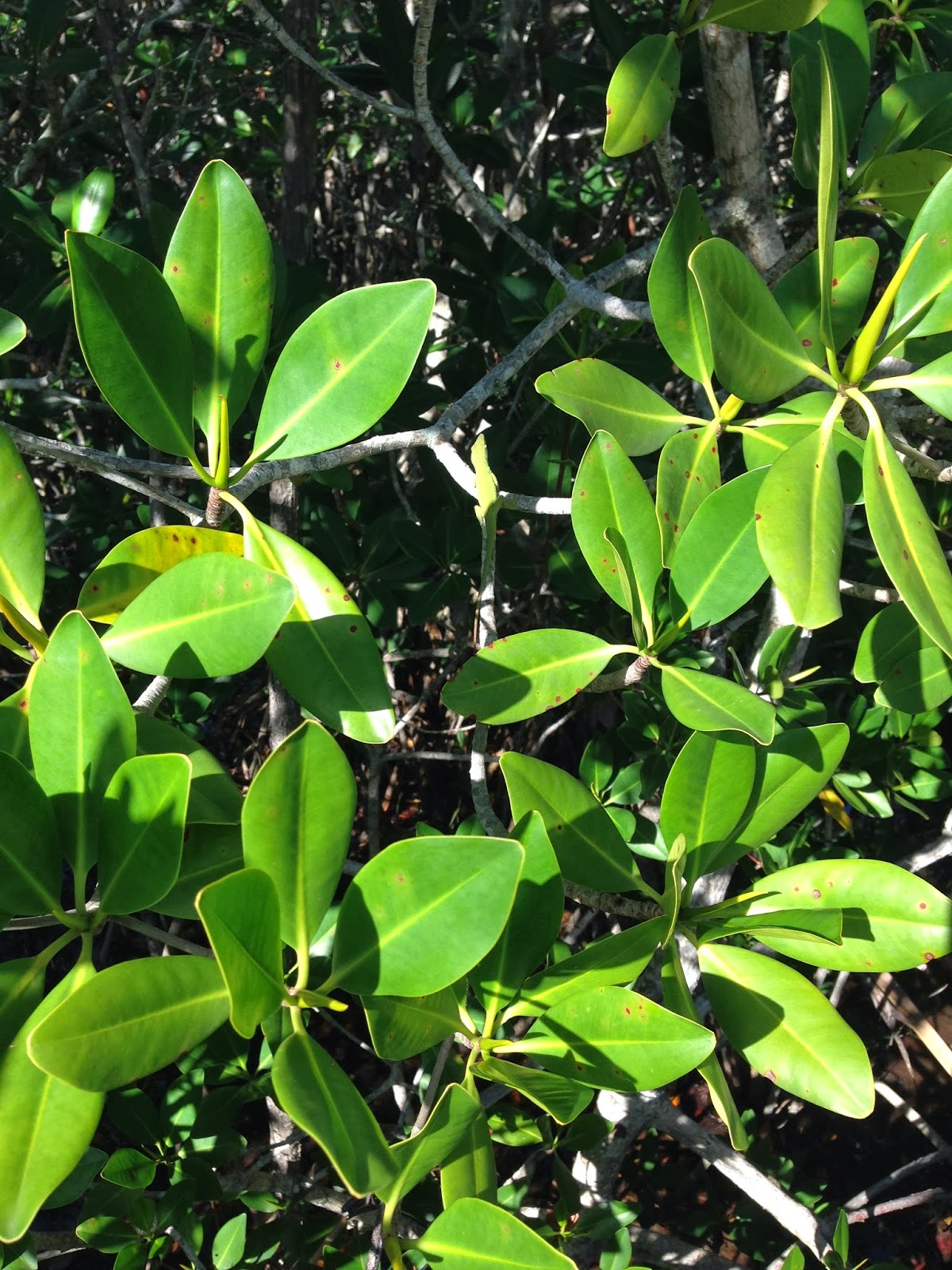 It's all about fun in the sun.

Weather report: It's warm and sunny

On Tuesday, I headed south where it's warmer.

Here's my back yard a few days before I left.

(Some of you may have seen this when I tweeted it)


So here's what greeted me on Wednesday:

In case you've forgotten, you can scroll up to see what I left behind.

Yesterday, replicas of the Pinta and Nina were docked at a marina near where I'm staying.  I couldn't resist a visit.

The first reason being that I visited the tomb of Christopher Columbus in the Cathedral in Seville during my visit there in October. 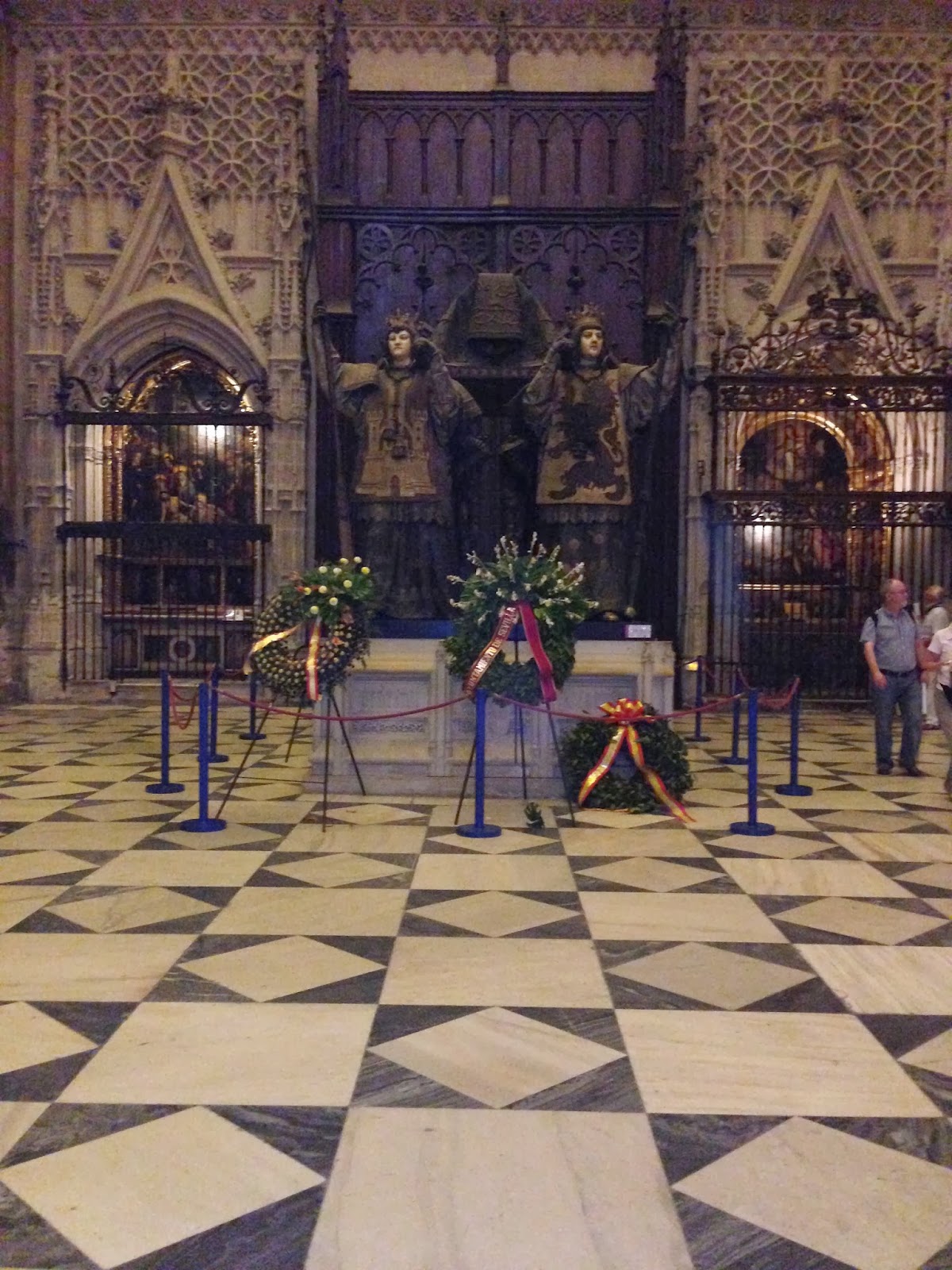 So, here's a shot of the boat Pinta. 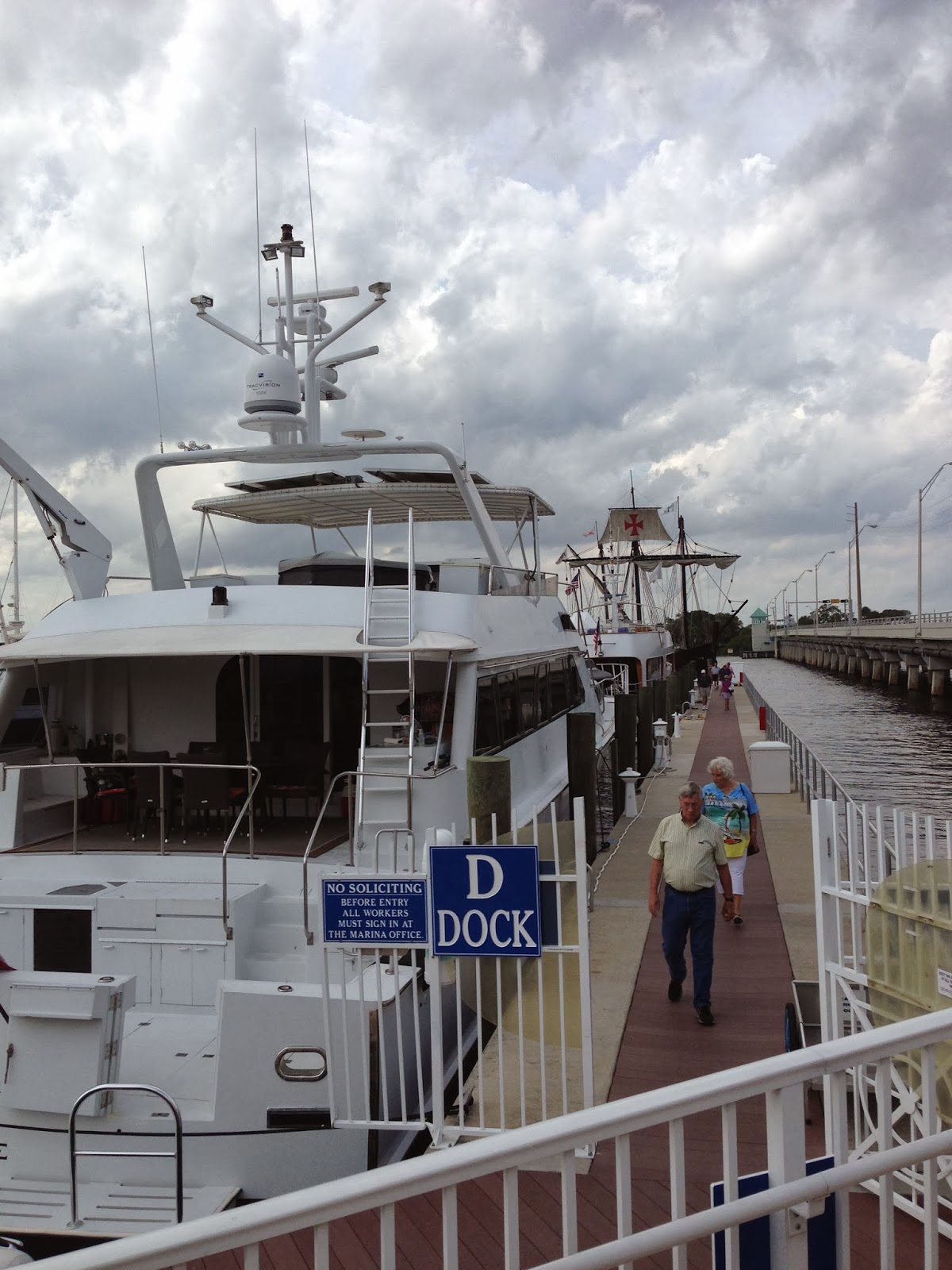 Can't see it?  Because the honkin' big yacht is blocking it?  Hint: It's the tiny square flag 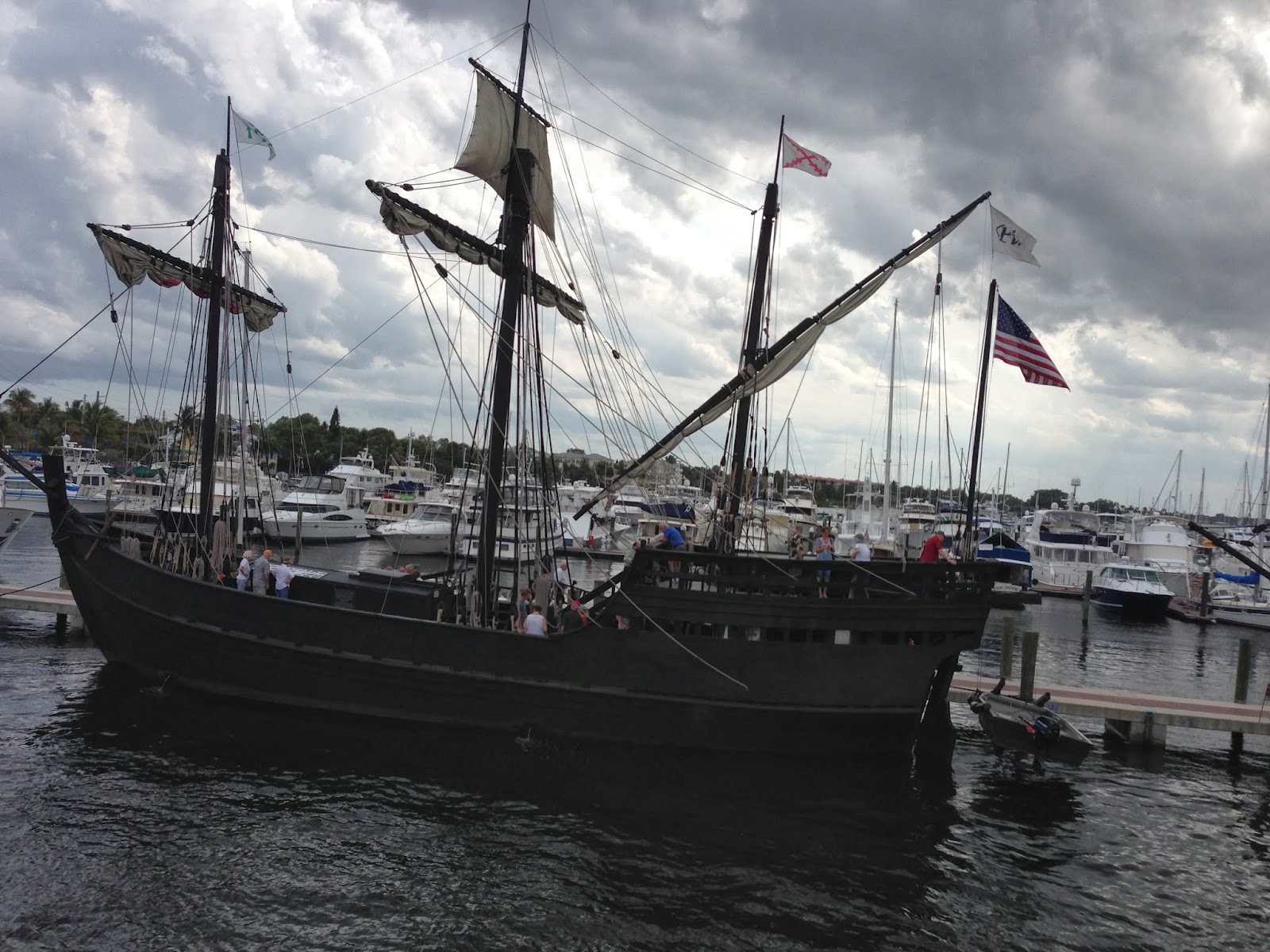 Here's she is from across the water.

The Pinta had a crew of 26 and the Nina 24.  The ships were so small the crew slept above deck because below decks were filled with provisions.

Factoid:  Columbus chose the Niña as his ship.

Their diet was especially varied: 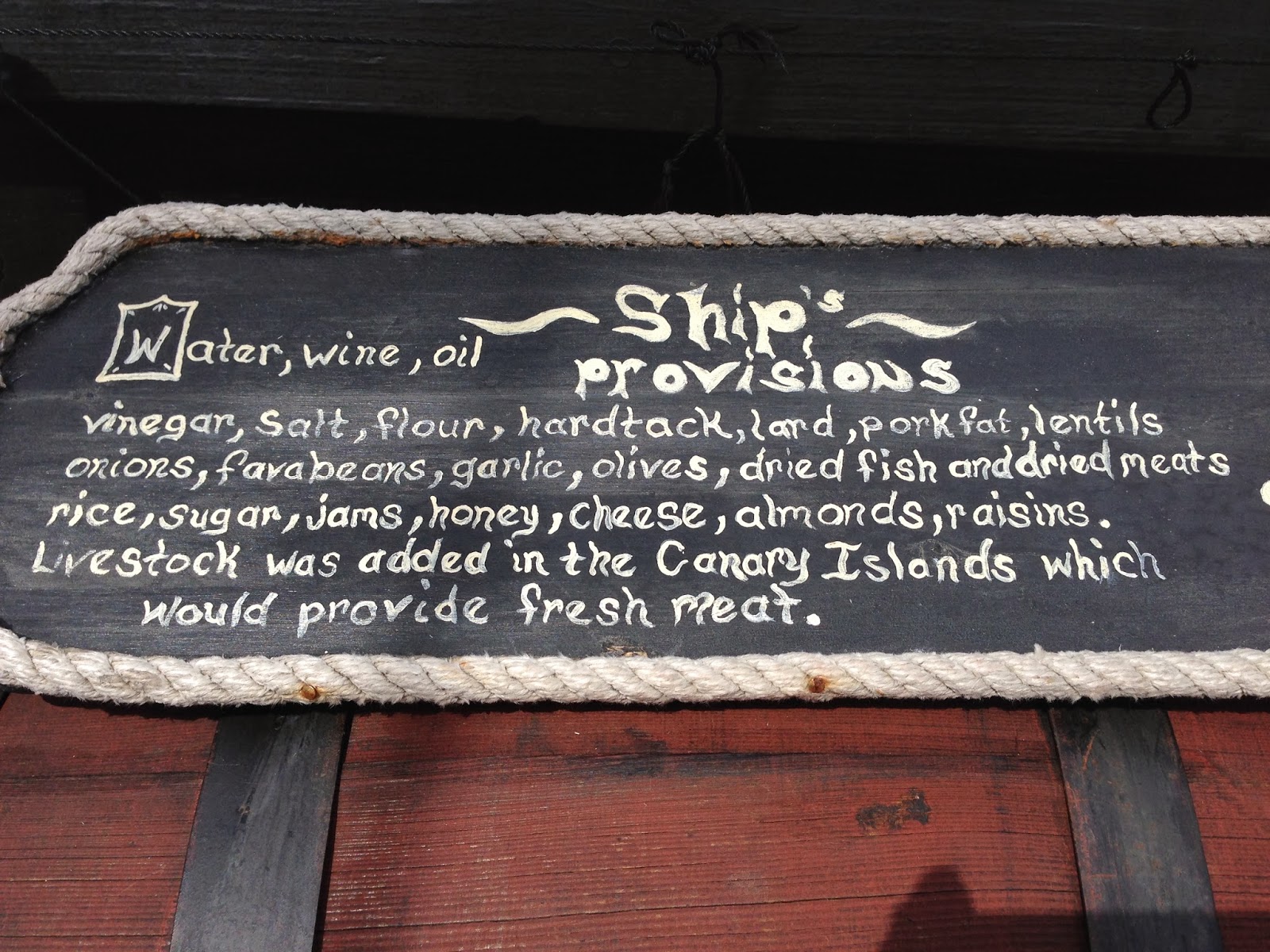 Personally, I can't imagine spending 24/7 on a ship between 65 and 85 feet in length crowded to the gunnels with 26 or 24 other bodies.