My Flight to Rabat

Friday, I boarded a plane (and just so you know, Delta is NOT Air even if they're 'associated') to fly to .  It's always been an easy trip.  Leave in the early evening, settle down and sleep 'til I arrive in , hang around for a couple of hours and then fly into .
Not this time.
I figured things were going well because I was in about the only row of 3 seats with only 2 of us seated.  Until we took off.  And the kid in the row behind started crying.  Not just the whimper or whine of ear troubles taking off.  Nope.  This was full-throated, frantic wailing.  That went on.  And on.  She'd stop for about 5 minutes, then start up again.  For anywhere from 15 minutes to half an hour.  Another 5 minute break and back to wailing.  Mind you, this is a 7-8 hour flight.  All plans of arriving rested flew out the window -- so to speak.
Eventually, the kid wore herself out -- or I was even more exhausted and fell asleep in spite of the racket.  In any event, I got a couple of hours sleep, max.
During the layover in , I got more and more nervous as people assembled for the flight to .  Kids.  Lots of kids.  Lots of little kids.  I groaned inwardly -- and maybe not so silently.  This flight is only a couple of hours long, but I had figured I could at  least get in a nap.
As it turned out, it wasn't bad.  There were a few cries here and there, but the usual fussiness, not the frenzied crying on the previous flight.  So, I was able to get a couple of hours sleep.
When my son and lovely granddaughters ( 4 and 6) greeted me after I got through customs, I gave them big hugs.  My son asked how the trip went.  So I came to a dead stop, knelt down, beckoned the girls over and said:  "Poor Gramma had a baby in the row behind me crying all night.  Then there were kids crying on the flight here.  So, please do me a favor.  Don't cry today or I'll run out of the house and run screaming down the street, tearing my hair out."
They are the best girls.  Not one whimper or whine out of them for the whole time since I've been here. 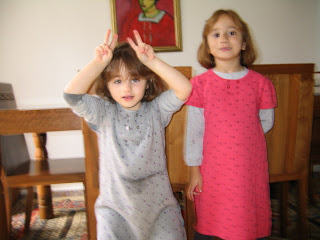 More about later.
Judi
Posted by Judi at 7:24 AM 2 comments:

So, Night of Turmoil really started back in December when  I was visiting No. 1 Son and his family in Morocco.  Shortly before I returned home, we began to hear about protests in Tunisia and even found some news coverage—or at least YouTube uploads.  This was of particular interest since his wife is Tunisian.
Arriving back home, I watched lots of CNN-I (because the US news wasn't covering the protests back then).  The next thing that happened was my publisher, Whispers Publishing, put out a Call for Submission to celebrate some of the less well-known holidays.  One of them was International Peace Day and they were asking for very short stories (under 10 K) set in a place in the world experiencing conflict.  I really wanted to write about the revolution in Tunisia but hesitated, never having been involved in protests—or a revolution.
Most Friday evenings, my son calls.  The next time he called, I mentioned wanting to set a story in Tunisia during the protests but said I couldn't.  I didn't know about protests.  Plus, I was back working on the sequel to Ghost of a Chance, Frank O'Malley and Aerial Bonne's story and didn't want to abandon Frank--again.  The next week when he called, he asked me when I was going to write the Tunisian story.  I repeated the list of excuses and he said he could certainly help with the setting and proceeded to brainstorm the basics of the story.  I didn’t see that coming.  Never would have guessed one of my kids would become a brainstorming partner.  He assured me I wouldn't be abandoning Frank because it was his niece, Chelsea (he picked the name) O'Malley who had come to Tunis to teach adults English as a second language and Malik (No. 1 also chose the name) would be a student of hers.  I immediately saw the conflict, since ESL teachers can't have personal relationships with their students.
And that it how it started.  I e-mailed both son and DIL frequently to get answers to questions.  And watched hours of YouTube videos uploaded from Tunisia.
I wrote the story in three months.  Like it was all there, held back by a dam.  Just goes to show you never know what will inspire a story—or who will help. 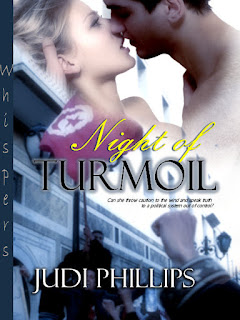 Chelsea O'Malley, English as a Second Language teacher in Tunis, Tunisia, is always prudent, never reckless.  Her adult ESL student Malik Bourjamaa, aspires to a career in news journalism, hoping to facilitate change in his country.  While attending a protest march during the uprising in Tunis, Malik is wounded, infuriating Chelsea and causing her to admit she desires to be more than his teacher.  Can she throw caution to the wind and speak truth to a political system out of control?  Night of Turmoil tells the story of one day during the Jasmine Revolution.
Buy:  Whispers,  Kindle
And check out the really cool trailer:  Night of Turmoil
Posted by Judi at 6:49 AM 10 comments: