A Little Tour of Asheville

Friday we went on the LaZoom comedy holiday tour of Asheville.

Okay, so we board a painted-purple-on-the-outside, pimped-out-on-the-inside school bus to tour around the city.

Windy Gale (I think that was her name) was our tour guide. 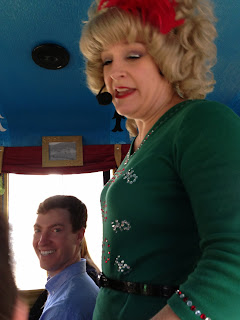 She was hilarious, interacting with the ‘tourists’ by planting kisses on the lucky bald guys (one of them was my SIL) 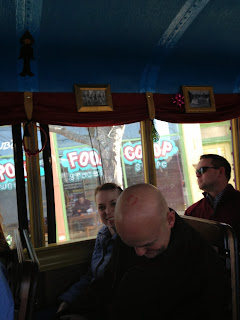 teasing passengers and ‘interviewing’ several drop-in, like the poor lost forest tree looking for a good time in the city 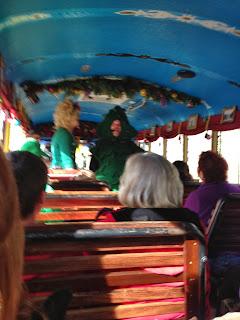 Santa, who was a bit worse-for-the wear after Christmas, and a giant cookie, Ginger Dreadlocks Man.

Along the way, we actually learned some interesting facts about the city, including that she has six degrees of separation from the owner of the only one of Elvis Presley’s guitars that isn’t in Graceland, that Asheville has been Beer City USA four years in a row, only losing this year to some city in Michigan (Grand Rapids, she reluctantly admitted).

We made a quick stop at the Grove Arcade, the concept for the first indoor shopping mall.  During World War II, it was used by the federal government for war purposes and later housed the National Climatic Data Center.  In 2002 it reopened as a public marketplace, with restaurants, boutique shops, offices, and luxury apartments on the top floor.  There’s a great coffee shop there, True Confections.  Tasty treats, too.

Last night we attended the 80th birthday of one of Lisa & Tony’s friends.  In between and after I watched more basketball than I have since I was a cheerleader in high school.

Christmas at the Biltmore Estate

Last night we had dinner in the Stable Café, a dining room located in the original stable at the Biltmore Estate.  Seriously, I bet those horses lived better than I do.  I forgot to take pictures while we were eating—too busy enjoying the delicious food—but here’s a link if you want to check it out.  Scroll dow to the bottom to see the pictures.

After dinner, we toured the house or castle or chateau—not sure exactly what to call it—built by George Vanderbilt.  Construction began in 1889 and was completed in 1895 of the 250-room summer estate.  Fortunately, we didn’t have to visit all the rooms.

It is an impressive sight, especially decorated for Christmas.

As we walked inside, live Christmas music was playing in the entry hall, decorated with greenery and poinsettias. 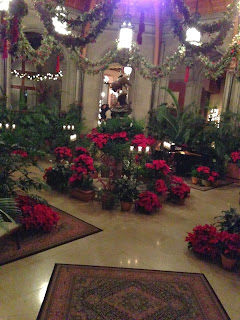 There is a ginormous decorated tree in the banquet hall.  They decorate a 35-foot tree that doesn’t begin to reach the nearly 70-ceiling.  I couldn’t begin to get a picture of the whole thing. 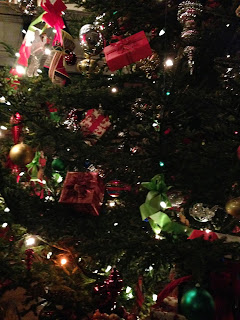 I will have to reassure my small fiberoptic Christmas tree not to be intimidated.  I truly prefer her.

There are 50 additional decorated trees throughout the house.  Here's a couple of them. 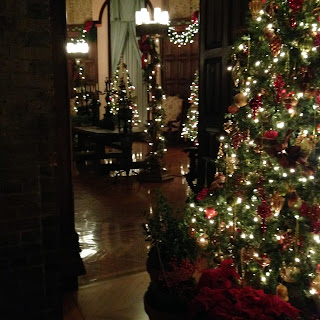 It is a spectacular house, but I couldn’t imagine what it would be like to live there.  It wasn’t exactly a cozy vaca cottage.

If you want to see more pictures click on the link below.
http://www.biltmore.com/visit/plan-your-visit/buy-tickets/candlelight-evenings

An if you're ever in the Asheville area, the Biltmore Estate is truly worth visiting.

I’m spending Christmas with my daughter and her family in Asheville this year.

Everyone was nice ‘cause there was no coal in anyone’s stocking.

But we did have some unexpected visitors.

An alien arrive with stylin’ glasses 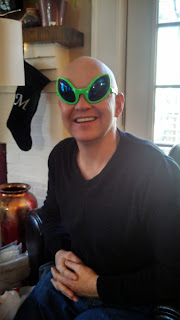 Then Mr. America stopped by for a snack. 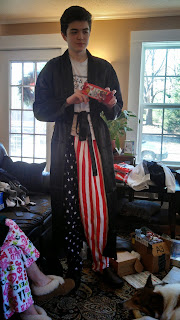 And Wonder Woman ran in to see if we needed any help. 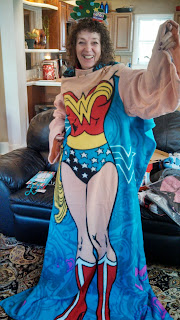 After all the excitement, these two settled down for an afternoon nap. 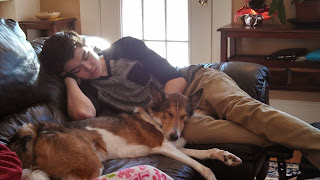 and the kittens curled up and quit attacking the tree. 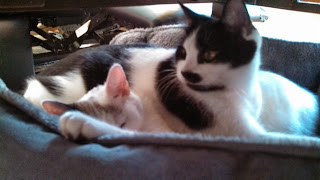 I hope everyone had a wonderful day!