Woke up in Spain this morning

Yesterday afternoon we left Rabat to spend a few days in Seville, Spain.

This involves about a three hour drive to Tangier on the Straights of Gibraltar.

The boy (not really a boy, but I'm his mother and he'll always be a boy to me) had a short meeting, which gave us a chance to walk around town a bit.

Meeting over, we drove to the port to board the ferry to Tarifa, Spain. Note:  Tarifa is where the word tariff comes from.


I also wanted to take a picture of the huge rig that scans the cars and contents--minus people.  Think airport scanner big enough to scan a line of 5 or 6 cars, including busses.  However, the very nice security guy told me that wasn't allowed.  No argument from this girl.

I opted for a view of the harbor.


Then we boarded and were off. (Caution:  this is noisy.  And don't fall overboard!)

The trip across the Straights only takes about half an hour.  Plenty of time to eat a snack and take pictures.  It also makes for a nice break from driving.

It was early evening and hazy so the pictures aren't as clear as on a sunny day, but the Pillar is the highest peak.  Below, Europe is barely visible on the left between the boat and K's head

In the Air Again

I arrived in Morocco yesterday Friday (their time) and wanted to share a bit of my travel sights.  Fortunately, there was no drama, like people being dragged off the airplane or delayed flights or gate changes--more tricky in Paris where my language skills falter.

In order to catch the 6:10 A.M. flight out of Albuquerque I had to kick the birds awake at 3:30 A.M., get dressed, feed the dogs, close the suitcases (left open in case of any last-minute additions) and load them in the car in time to leave at 4:30 to arrive by 5:00.  Fortunately Black Mesa coffee is up and running at the airport by then so I could be awake enough not to miss the flight.


Arrived in Atlanta on time--nothing for me to stress about since I had a six-hour layover.  Thanks to Marianne Rice, I had a fun read to dive into.  Check out Strawberry Kisses,  I recommend it.

Finally, at long last the wait was over for the overnight flight to Paris.  Sadly, I had a middle of the middle seat--you know, those plans that have three seats on each side and four in the middle.  Hemmed in by a couple of guys (not cute enough to distract) I got very little sleep.  Thanks again, Marianne.  Jake was much more entertaining in sooooo many ways than the my seatmates.

In Charles de Gaulle Airport, I made a beeline for Starbucks--yes, I’ve been in that airport often enough to know exactly where it is--and loaded up on caffeine.


Then on the plane for the last leg of the trip, Paris to Rabat, Morocco.

At last,  peace in the garden. 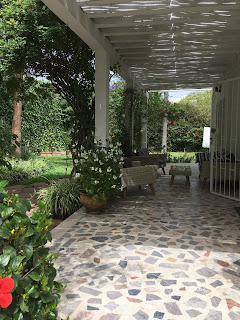