Out and About in Rabat

Today is my last day here.  "Leavin' on a jet plane" early tomorrow morning, so I thought I'd post some pictures from my doings her in Rabat.

Early on in my visit, I went to a horseback riding class.  Not to ride, but to watch Kensa.  She's quite the accomplished rider.

I discovered that the gate to the Jardin Botanique d'Essais was open, so I walked in.  Now, this garden has been closed at least three years to my knowledge, maybe longer, while they restored it.  In other years, when I took French classes at Amideast, I walked by it every day and wished I could go in.  Voilà.  This year I could explore it.

I mostly don't take artsey photos (usually don't have the eye for them) but I really like this one of an arbor. 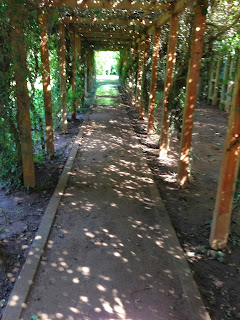 And, of course, no visit to Rabat is complete without visiting Chellah.  Off in the distance.

It was first settled by the Phoenicians

and then build over by the Romans.

In the 14th century, the Morenid sultan built a necropolis and other structures including a mosque.

And here's some of a wall with mosaics still on it. 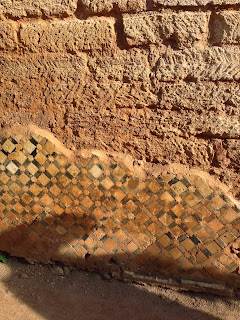 At the house, I've gone on a daily hunt for one or both of the tortoises living in the garden.  Found this dude today. 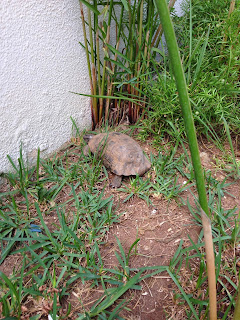 I've had a wonderful time here.  Enough time so that, although I'll be sad to leave, I'm looking forward to being home with my crazy dogs and enough ideas to write a zillion books.  Good thing winter's almost here--in Maine that is.

See you on the other side of the pond.

We spent part of a day visiting Italica, a small suburb not far outside of Seville. Two Roman emperors were born here, Trajan and Hadrian (of Hadrian Wall fame).  The site is well preserved because it was just an immense field and no city was built over it. 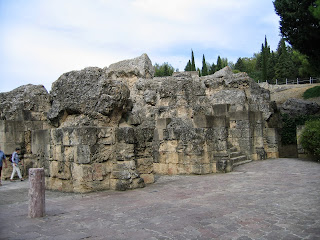 Much of the walls of the coliseum are still standing.  Can't you just imagine the gladiators striding through the below-ground tunnel 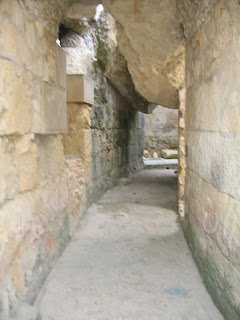 Anyone remember Russel Crow as Maximus battling on the arena floor. 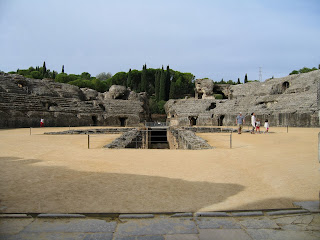 There are also some spectacular mosaics nearly intact.  How about a bathroom do-over? 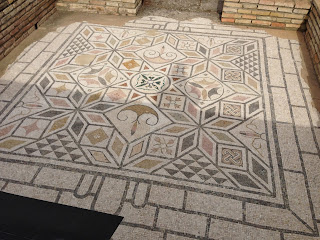 After exploring the site, we had lunch in a nearby cafe where they served awesome cheese among other things.

In Seville, there are also three Roman columns hidden away on a small street, constructed at the end of the first century during the reign of Hadrian, probably for a pantheon.  Although it's difficult to tell from the photo, the base of the columns is nearly 15 feet below street level.  That's how much the city has been built up over the centuries. 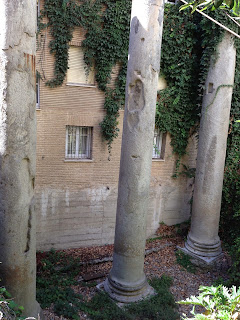 We rode a four-seater bike in Maria Luisa Park.  Lots of fun.  We toured the Cathedral.

and even visited the tomb of Christopher Columbus.  His travels were financed by King Ferdinand after expelling the Moors from Spain.  October seemed a particularly appropriate month to view the tomb. 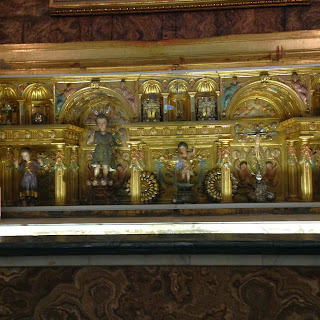 An interesting little fact.  The University of Seville is situated in an old tobacco factory.  Here's the plaque. 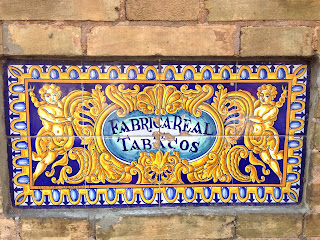 One of the things I'll remember most about Seville are the sounds.  The clip clop of horses hooves pulling carriages over cobbled streets and the cathedral bells pealing out over the city, especially easy to hear since we were staying within a block or two.

I've decided the hardest thing about writing these blogs is limiting the number of pictures I share.

I bet you figured from the "final day" title of my previous post I meant I wouldn't torture with more blogs.  Wrong!

Three days after returning from the Sahara, we left for Spain, driving to Tangier where we spent the night.  The next morning we boarded the ferry to Tarifa, credited with;the origin of the word tariff, since it was the first port to charge ships to dock.

The ferry takes approximately half an hour to cross from one continent to the other.  It was misty that morning, but here's a short video spanning the Straits of Gibraltar.

A side note.  Counting starting in the US, I've visited three continents this trip.

Sevilla is an amazing city.  You can walk everywhere.  The streets are quaint and very narrow, many barely wide enough for one car.

There are uncounted small plazas, always with one or more outdoor cafes. 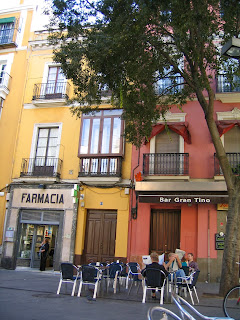 I tried to take pictures of them, but frequently failed since there are so many.  Here's another one. 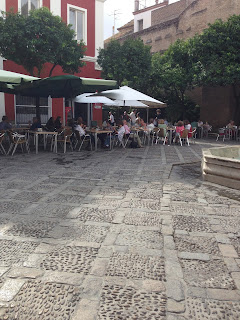 And lots of churches.

The Cathedral has a long history.  Probably it was the site originally of a Roman temple.  Then a mosque. The architect who designed the Koutoubia Mosque in Marrakech designed the mosque in Sevilla.

He also designed the uncompleted mosque near the mausoleum of King Hassan II. Much of the mosque was destroyed by an earthquake in 1755.

And let's not forget flamenco.  We didn't go every night, not that we couldn't, but walking all day, we didn't always have energy left to go out at 9:00. 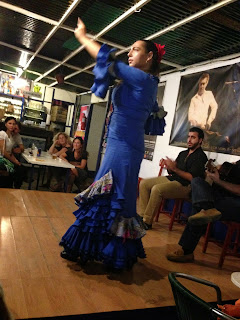 Up early in time to watch the sunrise the next morning.  I walked some distance out of the camp. 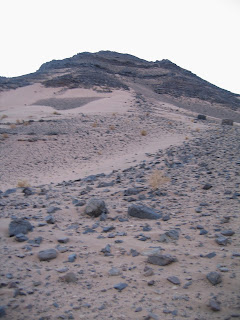 Mornings are incredibly quiet here.  Sitting, taking it all in, experiencing the peace, for a moment I felt deep in my heart I could be happy and content living in a Bedouin tent.  Like this small one I saw outside our camp.

The feeling slowly passed, and I realized I could be happy and content if power and WiFi were included.  Of course, that would distract from the peace.

For fun, I took a pic of my footsteps in the sand.  No telling who last walked there or who will walk next.  Or how long before the wind fills them in. 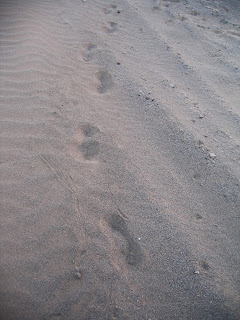 After a breakfast of omelet and fruit, we packed up and were back on the road.

At lunchtime, we stopped in N'aat Ben Haddou.

Aït Benhaddou is a Berber Kasbah or castle along the old caravan route between the Sahara and Marrakech.  No longer occupied, it is still impressive.

I was disappointed we didn't walk through and up to the lookout point.  It was midday and the Brit ladies thought it would be too hot to walk.  I did find a link to a video that helped give an idea of what it looks like inside.  I would say it's more like a pueblo in the American Southwest than what we think of as a building tiled and decorated with elaborate mosaics.

We had lunch on a restaurant terrace with a view of the kasbah. 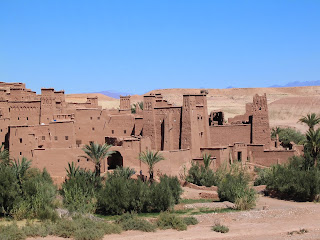 I chose kefta--almost as delicious as Joe made for my birthday.

Then the drive back to Marrakech, a stay in the hotel and the trip to Rabat.  For no apparent reason, the train was delayed leaving Marrakech and very slow for most of the way back.  Joe and I decided the reason was a state secret 'cause we'll never know why.

Back in Rabat, things are back to normal.  Zorro is checking out one of the resident tortoises (at the far left of the picture), trying to be brave. 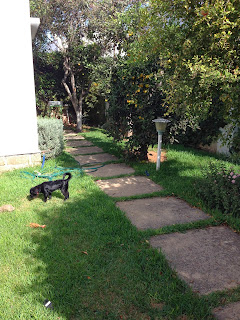 An Evening in the Desert

We arrived at the Bedouin camp just after sunset.  Unfortunately, the only inside picture I thought to snap is blurry.

The "rooms" were nice, assorted tapestries on the floor (as well as on about half of the "courtyard" and the bed was comfortable.

We were served Moroccan tea, hot and sweet with mint.  (The poor British ladies never quite adjusted to tea with sugar.)  In the seating area in the middle of the camp, Muhammad brewed the tea over a small gas stove.  When it was heated, he poured some into a glass, then poured it back into the pot, blending the elements of air, earth and water.  He repeated this three times.  Then, holding the pot high above our glasses, he filled them, making sure there were bubbles on the top.  No tea should be served without them.  Traditionally, the higher the pour the more someone likes you.

The guys joined us in the brightly draped seating area, brought out a variety of darbuka drums and a guitar and treated us to an impromptu concert. 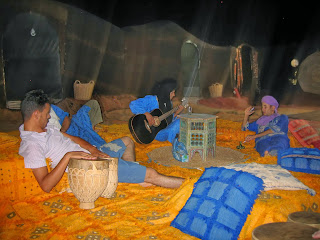 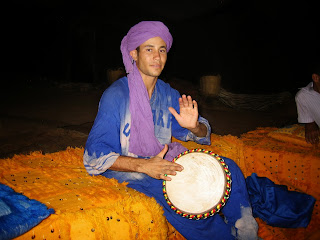 The crescent moon and evening star hung in the sky.  I would have loved a photo, but couldn't make it work.

Then it was time for dinner.  The dining room was a delightful surprise, more in keeping with an Arabian Nights fantasy.  We were served chicken tajine and fruit.

After dinner, we settled on stools around a campfire, listened to traditional songs and learned some rhythms on the darbuka.  With the sun down, the heat of the day disappeared.  The evening breeze was cool and I'm glad Joe lent me a light fleece jacket.

Before going to bed, we stared at the brilliant stars flung across the sky.  Easy to do with no ambient light to interfere.

Since my last post, I’ve been interrupted by to Seville, Spain and had several dental appointments.  So, let’s travel back in time to the desert.

The Drâa Valley stretches between Ouararzate and Zagora, a lush, narrow oasis in the dry landscape filled with palms and other trees.

We arrived in Zagora and met our camel leader, Muhammad.


The camels were nicely behaved, contrary to their grumpy reputation.  They were all lying down when we approached them and climbed aboard.  When they stand, it’s rather like riding a tsunami wave on a surf board.

The ride is something else.  Seriously, do not consider this if you want to snuggle with your sweetie anytime soon.  Those saddles are painful.  And a camel's pace is irregular to say the least.  Just when I thought I’d figured out the rhythm, her next step changed it all up.  When I get home, I plan to put together a little video I made of the ride and post it on YouTube.  For now, here’s a couple of pix.

The sun, setting behind us, cast long shadows. 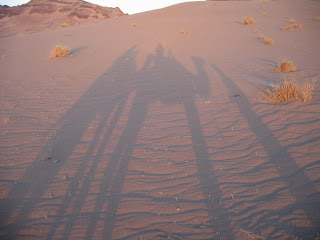 This is the terrain we traveled over:

After an hour, we stop for sunset pictures. 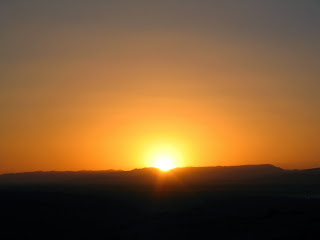 Even limping into camp, I wouldn’t trade this for anything.

Tune in next time for a evening at camp.
Posted by Judi at 2:08 AM 8 comments: